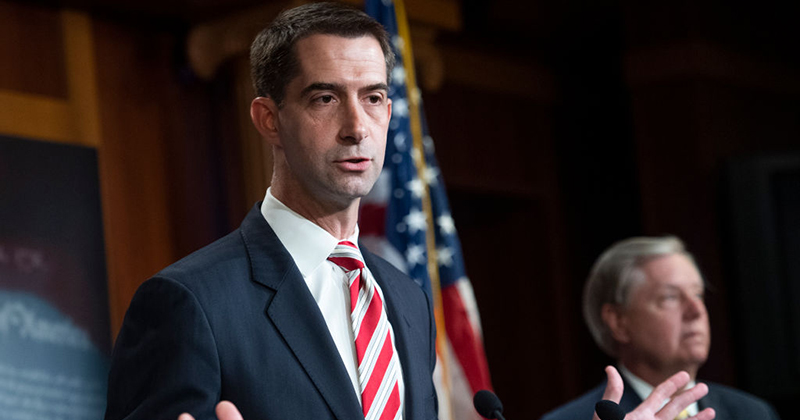 GOP Senator Tom Cotton blasted the ‘woke left’ Monday for ignoring China’s brutal human rights violations while simultaneously demonizing the US as a terrible country to live in.

In an interview with Sirius XM’s Breitbart News Daily, Cotton reminded listeners that “The Chinese Communist Party is an evil regime.”

“They are running concentration camps in Northwestern China, and they are persecuting Christians throughout their region, and they have long forced abortions on women or sterilization on women,” Cotton urged.

“Yet many of the woke champions on the left in America, like so many NBA players led by Lebron James, turn a blind eye to their crimes, at the same time we denounce our own police officers, which I think is a disgraceful and shameful contrast,” the Senator asserted.

Cotton charged that China has eroded US manufacturing for decades while “too many politicians in Washington stood by.”

“They have broken their fundamental obligations to Hong Kong. When they received Hong Kong from Great Britain, they promised to preserve its unique character for 50 years. … Years later, that’s gone.” Cotton added.

“They in essence invaded India, the world’s biggest democracy, killing 20 Indian soldiers in a brutal attack. They’re conducting threatening air and naval maneuvers in the vicinity of Taiwan and Japan,” the Senator also charged.

Turning to the coronavirus pandemic, Cotton said that “If Beijing had had its way, we might never have known about this coronavirus originating in Wuhan until it spread all across the country and perhaps all around the world.”

“And yet [the World Health Organization] covered for Beijing’s duplicity for months and months and months. This is one reason the president is withdrawing from the WHO and rightly so,” he continued.

“China is only growing more aggressive, partly using this pandemic for cover. That’s one reason why it’s so important that we’ve finally begun to stand up to China under President Trump,” Cotton added.