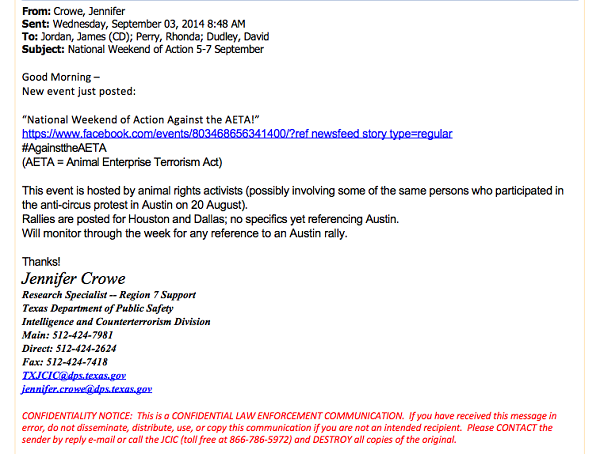 According to news site MuckRock.com, which obtained the documents through a public records request, a counterterrorism specialist with the Texas Department of Public Safety alerted fellow employees to the “National Weekend of Action” shortly after discovering the page.

Hosted by the Institute for Critical Animal Studies, the event’s description called for activists to set up film viewings, workshops, protests and vegan potlucks to “educate the public about federal laws that specifically target animal advocates.”

Information regarding the event was shared widely throughout Texas agencies, even making its way to the Austin Regional Intelligence Center (ARIC).

“We will be monitoring as well,” an ARIC officer wrote in a response email.

Despite ARIC policy forbidding the collection of information on individuals and groups unrelated to terrorism, an Austin police spokesperson seemingly defended the action after being pressed by MuckRock.

“The ARIC is tasked, from an all-crimes perspective, with keeping the citizens of Austin and the surrounding communities safe,” the spokesperson wrote. “As part of this mission, the ARIC will examine unrestricted, publicly available social media solely with the intent of looking for bad actors that would cause harm.”

The incident remains somewhat unsurprising given the findings from a 2012 bi-partisan Senate report on fusion centers such as the ARIC, which found the centers to be a “useless and costly effort that tramples on civil liberties.”

Last January a similarly benign group known as “The Rainbow Family” was also targeted by law enforcement for their radical advocacy of “peace and love.” Police requested a quarter of a million dollar grant from the Department of Homeland Security to create a mobile command unit to spy on the “extremist” group.

A New Hampshire police chief also requested cash from DHS in 2013 in order to obtain an armored military vehicle, citing the threat posed by “Occupy activists and libertarians” as justification.