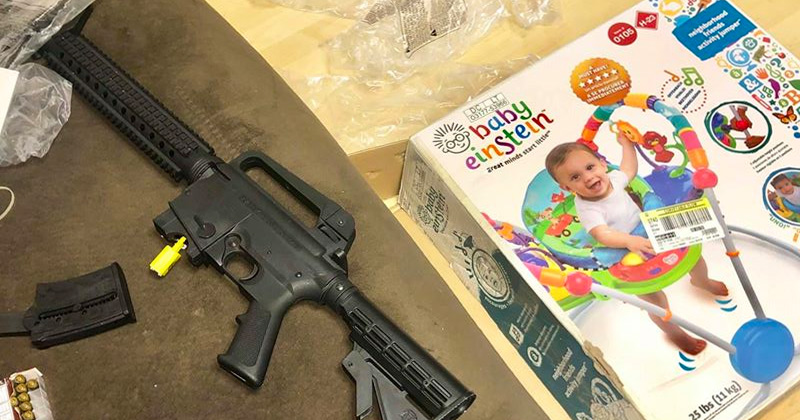 A couple in Florida stumbled on a major bargain when they purchased a gift for a baby shower at a Goodwill resale store.

Inside a box claiming to contain a Baby Einstein bouncer for $10 was a .22 LR caliber Mossberg 715T semiautomatic rifle, which costs upwards of $299 at sporting goods stores.

Speaking to the Northwest Florida Daily News, military wife Veronica Alvarez-Rodriguez said they were initially shocked to find the baby bouncer at the Goodwill in Valparaiso.

“It was like the perfect gift for the baby shower,” Alvarez-Rodriguez told the news outlet.

But the couple was again shocked when the baby’s dad opened the box and announced, “You guys got me a gun!”

“Alvarez-Rodriguez said some of the guests were laughing, but she and her husband were shocked,” reported NWFDailyNews.

After an inspection and a review of the couple’s identification, police told the father-to-be he would be able to keep the gun, however they later asked for the firearm back and said it would be placed under a 90-day hold pending further investigation.

“When you go to the Goodwill for a baby shower gift thinking you got a good deal on a bouncer ($10) not even opened and you end up opening a MOSSBERG 715T Semi-Auto Rifle,” she wrote on Facebook.

“FYI: This was Valparaiso Goodwill, Serial number was clean & Crestview Police said do what you want with it. The gun now belongs to Baby Jonathan who is due to enter this world any day now,” she wrote, adding the hashtag #wegiftedhimhisfirstgun.

Alvarez-Rodriguez also uploaded a video showing the gun fits in the box, after skeptics claimed the story was a staged stunt.

Constitutional attorney Norm Pattis joins The Alex Jones Show to express the shock he and his peers felt after the Supreme Court’s decision to allow people to sue gun manufacturers.