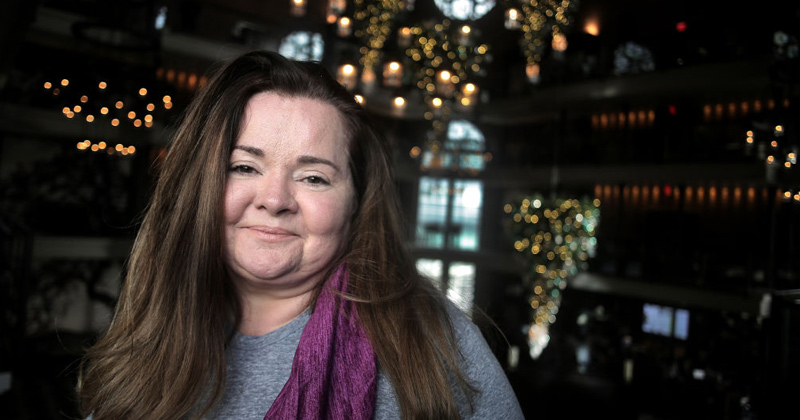 An Arizona State University professor who documented her battle against COVID-19 on Twitter and subsequently died from the disease was found never to have existed.

In an elaborate cat-fishing hoax, Twitter user @Sciencing_Bi claimed to be an Indigenous pro-LGBTQ professor who was a member of the Hopi Native American tribe and was forced to teach during the coronavirus outbreak.

For months, @sciencing_bi had tweeted about their apparent battle with COVID-19, and being forced to teach in-person at Arizona State University in April. Early last week, @sciencing_bi tweeted about needing help fighting COVID misinformation on a COVID survivor Facebook group. The account tweeted extensively about social justice, the professor’s Indigenous heritage as a member of the Hopi tribe, the LGBTQ experience in academia, and their battle with COVID-19.

The account went back to 2016 and frequently mentioned former Vanderbilt University assistant professor of neurology BethAnn McLaughlin, as noted by the New York Times:

Since 2016, it has posted often about issues around social justice in the sciences, with a focus on activism and research about sexual harassment.

It was also active in the career of Ms. McLaughlin, a neuroscientist. (News of the relationship between the Twitter accounts was reported by Heavy.com, Science and the Chronicle of Higher Education.) It was key in promoting a petition that called for Ms. McLaughlin to be given tenure at Vanderbilt University. She was not given tenure in 2017, a decision she said was influenced by her having testified against a former Vanderbilt professor accused of sexual harassment. Her effort to reverse that decision was unsuccessful in 2019, and she left the university that summer.

On one occasion, the account responded to someone asking Ms. McLaughlin for information about Vanderbilt with extensive details about the university’s salary structure.

But the fictional professor’s battle with COVID took a turn for the worse on July 31, when McLaughlin had the misfortune of informing everyone about @Sciencing_Bi’s death. 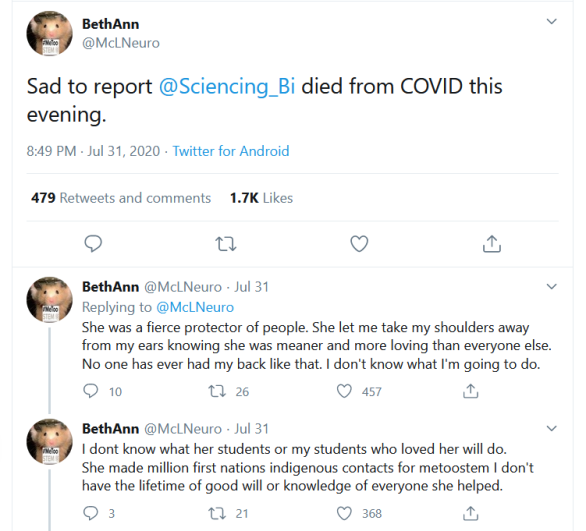 “She was a fierce protector of people. She let me take my shoulders away from my ears knowing she was meaner and more loving than everyone else. No one has ever had my back like that. I don’t know what I’m going to do.”

“She was supposed to get Hopi talisman for health as gifts for us but she ran out,” McLaughlin claimed in another tweet. “God. The irony of running out of health talisman.”

McLaughlin even invited multiple professors to a memorial she organized for @Sciencing_Bi on Zoom.

The professor’s untimely demise prompted condolences “from people in academia, who said they knew the professor behind the account,” according to Vice.

However, no one actually knew the person as they didn’t exist.

Both ASU and the Hopi tribe told Motherboard they could find no information on the person in question. Then, after many had figured out the hoax over the weekend, Twitter suspended the @Sciencing_Bi account, along with McLaughlin’s.

ASU confirmed the hoax in an email to Motherboard, saying, “Unfortunately, this appears to be a hoax. We have been looking into this since this weekend and cannot verify any connection with the university.”

After the Zoom memorial, entomologist Michael Eisen said he was suspicious and began looking for proof of @Sciencing_Bi’s existence, but could find none.

“The combination of the weird things that were happening on the call and looking at the tweets and seeing how much they circled BethAnn, it just became obvious to me,” Eisen told the NYT. “‘Oh, this is BethAnn.’”

On Tuesday, after the hoax had been thoroughly debunked, McLaughlin announced she was behind the account.

“I take full responsibility for my involvement in creating the @sciencing_bi Twitter account,” McLaughlin told the NYT in a statement delivered by her lawyer. “My actions are inexcusable. I apologize without reservation to all the people I hurt.”

It remains to be seen whether McLaughlin will face justice for her fraud, but it’s a good lesson not to trust everything (or everyone) you see on the internet.

Alex Jones breaks down how Trump needs to go beyond holding the ChiComs for the spread of Covid-19, and hold Bill Gates and Fauci responsible for the damage done in the name of the pandemic hoax.