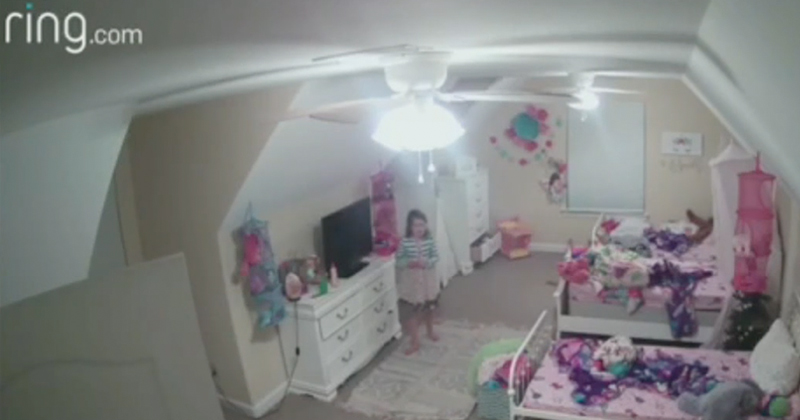 An anonymous pervert spied on an 8-year-old girl in Mississippi through an online camera network, in one of a number of incidents affecting owners of Ring camera systems nationwide.

Footage provided to ABC News’ Good Morning America by mother Ashley Lemay shows her daughter Alyssa going about her business in her bedroom, before she’s startled by strange music being broadcast over the camera.

As Alyssa searches her room for the origin of the music, a strange voice comes on the intercom and begins conversing with her.

“Who is that?” Alyssa asks, before a male voice answers, “I’m your best friend. I’m Santa Claus.”

The man then encourages Alyssa to destroy her room, saying, “You can do whatever you want right now. You can mess up your room. You can break your TV.”

Visibly shaken, Alyssa finally yells out for her mother.

The girl’s mother told ABC the camera hack is one of the worst possible things she can imagine.

“I can’t even put into words how violated I feel,” Lemay said. “It really is like my worst nightmare.”

“Owners of Ring security cameras in Mississippi, Georgia, Florida and Texas have reported incidents where hackers tormented families with racial slurs, encouraged children into destructive behavior and demanded a ransom in Bitcoin.”

The invasion of privacy and the growing number of incidents should be a global concern, as more people buy the new “smart” recording devices for friends and loved ones going into the holiday season.

In a statement, Ring said the hacks were not due to the system’s shoddy security, but instead blamed users who recycle frequently used logins and passwords from other devices.

“Due to the fact that customers often use the same username and password for their various accounts and subscriptions, bad actors often re-use credentials stolen or leaked from one service on other services,” Ring’s statement reads.

“As a precaution, we highly and openly encourage all Ring users to enable two-factor authentication on their Ring account, add Shared Users (instead of sharing login credentials), use strong passwords, and regularly change their passwords.”

As for Alyssa, she says the incident has traumatized her.

“I was even scared of my room for a few days. I’m still a little bit scared of it,” she said.

It’s been exposed that the Nest home security system has a hidden built-in microphone which Infowars has previously reported on.