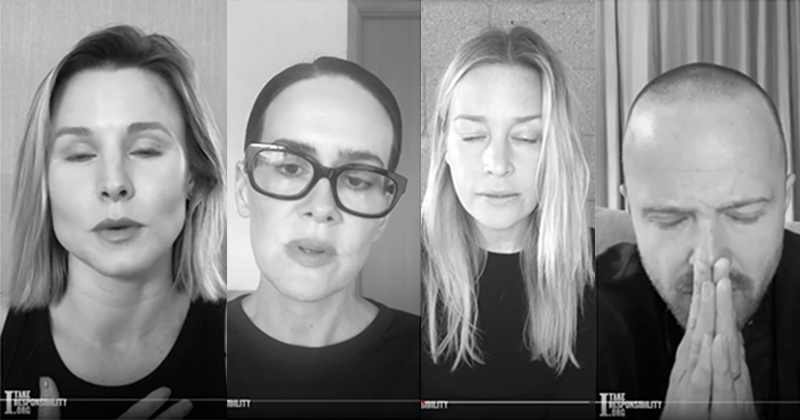 A host of Hollywood celebrities have once again come together to pretentiously lecture everyone else with a cringe video in which they declare they ‘take responsibility’ for a host of previous sins including ‘remaining silent’ and ‘turning a blind eye’ to ‘unfair stereotypes’ and ‘police brutality’.

The video, produced by leftist group Campaign Zero, features Aaron Paul, Kristen Bell, and Sarah Paulson, along with a host of other virtue signalling TV actors you’ve probably seen but don’t really know the names of.

The video claims that “black people are being slaughtered in the streets, killed in their own homes,” and that a range of activities such as going for a jog or sleeping “should not be a death sentence.”

Aaron Paul also decrees that “cops must be prosecuted, they are murderers.”

The comments on the YouTube version of the video were turned off after a massive backlash ensued.

An accompanying website, itakeresponsibility.org, can only be accessed after visitors genuflect and self-flagellate by choosing a sin they have committed from a handy drop down menu, and then vow to ‘make it better’ by choosing a solution. 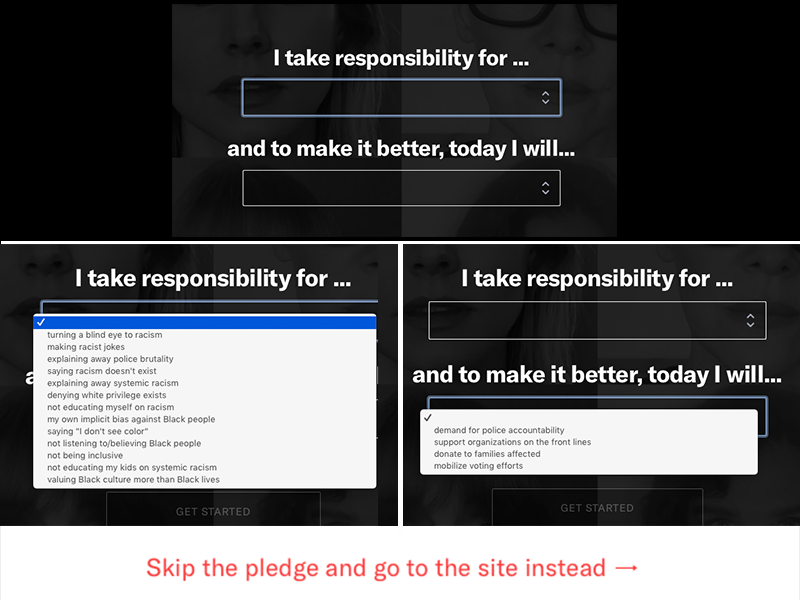 Visitors do have the option to ‘skip the pledge’ if they scroll down, but the only reward waiting is the cringe video.

The campaign was roundly mocked, with British comedian Ricky Gervais leading the way, noting the total lack of diversity in the video:

Terrible lack of diversity in this video. https://t.co/TY7zZGVcjd

Fact: There are more celebrities in this video (12) than there were unarmed black people shot by police in 2019 (9). https://t.co/bSmb3RMUAM

Okay here’s the game. It’s the Cringe Challenge. Watch this celebrity PSA for as long as you can until the cringe overwhelms you and you have to stop because the secondhand embarrassment is too painful. Post your time in the comments. I got 47 seconds.

There should be a game to see how much of this you can sit through. I made it six seconds and was quite impressed with myself. https://t.co/vqS1kQAllZ

This ritual of self-flagellation is beyond bad comedy. They might as well be walking barefoot in the streets wearing sackcloth and ashes. https://t.co/kCSAIppu2q

#ITakeResponsibility? Are they acting in this PSA? Did black people ask for this? Can someone help me understand?

Turns out the celebs behind the #ITakeResponsibility video got it a bit wrong and want to apologise.
Let’s hear them out…. pic.twitter.com/mpVyhLZAaP

This was my auditon tape for the #ITakeResponsibility PSA. Sadly, I did not get the part. pic.twitter.com/vpxX5UDEtV

Rich people from the entertainment industry speaking against privilege, inequality and division is about as ridiculous as it gets. Your industry is the problem. #defundtheentertainmentindustry #itakeresponsibility https://t.co/89mu3TqlkF