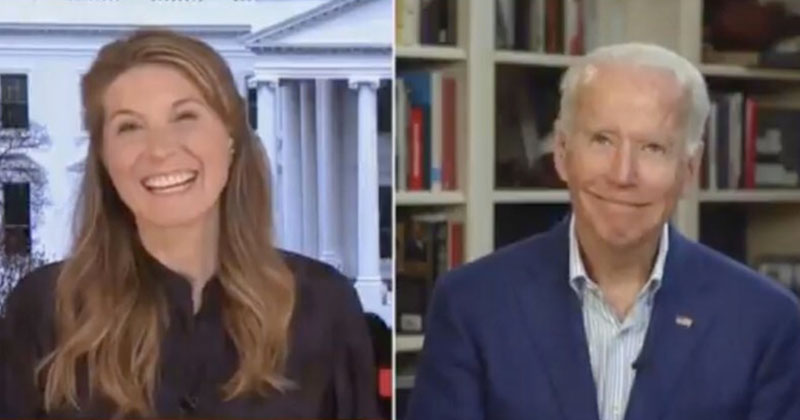 Democratic presidential frontrunner Joe Biden made the rounds on the cable news networks Tuesday in an attempt to demonstrate his stalwart leadership in this critical time of uncertainty.

Instead, all he managed to do was stumble, bumble, and violate CDC safety guidelines during his uninspiring and, at times, cringeworthy interviews.

During an interview with fawning MSNBC host Nicole Wallace, Biden repeatedly lost his train of thought, created awkward silences, and made nonsensical statements throughout his interviews.

In this clip, Biden forgets what he’s saying.

Here, Biden says he’s surprised Trump is “all of a sudden being tough on China,” even though Trump’s hardline stance on China over trade and economics is a major pillar of his “America First” platform.

Notably, Biden was the one who repeatedly said last year that “China’s not our problem.”

Not awkward at all pic.twitter.com/YIumjPR4Lj

In this cringeworthy clip, Biden asks “Why can’t Trump just act like a president?” before adding: “That was a stupid way to put it.”

Of course, Wallace made a point to smile like a maniac throughout Biden’s interview.

In an interview with “The View,” Biden said the U.S. must find a cure “to make the problem worse.”

"Are you at all concerned, as President Trump said, we cannot let the cure be worse than the problem itself?"

During his interview on The View this morning, Joe Biden could not stop touching his face, even licking his fingers at times on live TV in the midst of the coronavirus pandemic.

I put together a short compilation: pic.twitter.com/jPRKNJsWoz

Less than a minute after Joe Biden said he has not taken a coronavirus test, he coughed into his hand on CNN.@jaketapper immediately told him he should be coughing into his elbow and Biden pushed back, saying it's okay because he's in his house…

This is not the look one aims for when running for President of the United States.

Dr. Steve Pieczenik joins The Alex Jones Show to give his diagnosis of Joe Biden as being senile with dementia.