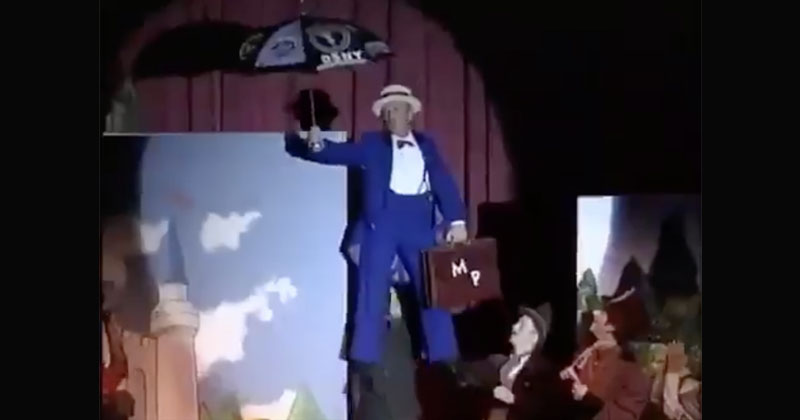 The video shows Bloomberg appear on stage in an outfit out of Mary Poppins, complete with an umbrella that grants him the ability to “fly,” while he brags about taking the presidency one state at a time.

“I’ll tell you where I’m going,” Bloomberg says haltingly as he unfurls his umbrella.

“First, Iowa. Then, New Hampshire!” he says as he begins to float above the stage (Notably, Bloomberg skipped those two primary states).

“Maybe I can get the whole country to behave!” he adds as he floats across the stage until the curtain drops.

The bizarre footage prompted many to mock the awkward performance.

Whoever came up with that needs to be fired. Big time. pic.twitter.com/sL1lObFX41

what a dynamic presence

This comes as the billionaire former New York mayor pours money into efforts to make himself seem more hip and likable to millennials and Gen Z, paying social media personalities to speak highly of him and deploying memes across the internet to make him appear “cool.”

Bloomberg has even hired a comedy writer and “narcissist expert” to help his campaign gain insight into President Trump’s thinking ahead of the election.

The Bloomberg campaign hired an expert on narcissism and a comedy writer to get inside Trump’s head pic.twitter.com/1ZDUwohL1h

Hillary believes she has three covert roads to the White House — and one is through Mike Bloomberg.