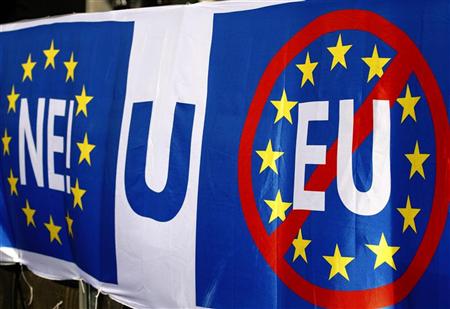 Police have clashed with anti-EU demonstrators in Croatia a day ahead of the country’s referendum on whether it will attempt to join the union. Meanwhile, a recent survey shows that about 40 per cent of Croatians oppose entering the EU.

The clashes erupted at the end of a protest rally of about 1,000 activists when a group of demonstrators attempted to take down an EU flag.

Protesters carried banners reading “No to the EU” or “I love Croatia” and chanted anti-EU slogans.

At least three protesters were arrested as the result of the clashes, and there are also reports that some demonstrators were injured by police.

On Sunday, Croatian citizens will answer the question “Do you support the membership of the Republic of Croatia in the European Union?”

Patrick Young, Executive Director of the investment advisory firm DV Advisors, believes that the swell of those who would say “no” to this question is due to what people see in neighboring countries that have joined the EU – the ongoing protests in Romania, for example.

People are “protesting because they see the European Union not delivering its side of the deal – and the deal is free trade and jobs,” he explained.

He also points to the EU’s vast economic problems as one a reason why so many Croatians are against joining.

“Ultimately there is economic chaos within the European Union at the moment, driven from the Eurozone – and that is not to the advantage of Croatian citizens.”

“The problem is that the European Union really cannot solve its internal problems at the moment. Rather, it is in total denial about a problem – about the Euro,” he concluded.

The question now is whether Croatia should join the EU at a moment when the union is deep in crisis, international consultant and former Belgian MP Lode Vanoost told RT.

“If now they say, ‘No, we’d rather wait’, they might be waiting forever, and that’s the risk they – at least the political class in Croatia – does not mean to take. What strikes me is that all the political parties represented in parliament are for EU accession – all the manifestations that we see are done by organizations that are not present in it.”

Regarding the fact that protesters defend an opinion held by some 40 per cent of the population – that is, opposition to EU membership – that’s a bad sign for the Croatian political class, Vanoost says.