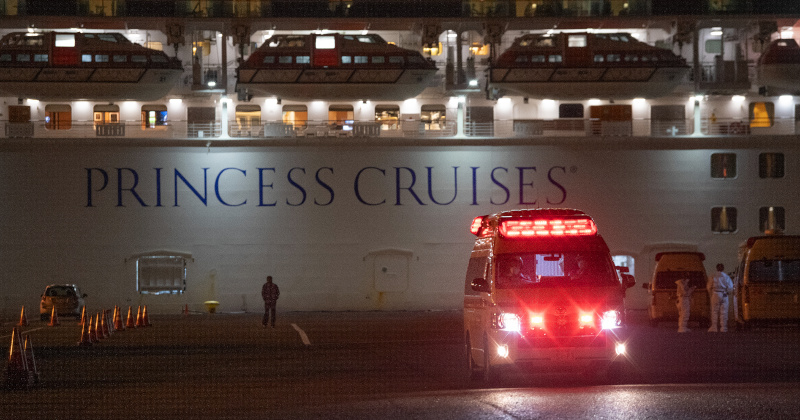 The nightmare cruise from hell just got even worse for the thousands of passengers still aboard.

The Diamond Princess, the cruise ship that has been quarantined off the coast of Yokohama, Japan for roughly a week now, saw the total number of confirmed nCoV infections climb to 136 on Monday, cementing its position as the host of the largest outbreak outside China.

Japanese health authorities have been extremely careful in dealing with the ship, which has become a massive albatross for the government of PM Shinzo Abe.

While Hong Kong let a cruise ship sail yesterday following a 4-day quarantine (the ship was reportedly found to be free of viral infections), the ‘Diamond Princess’, and the 2,500+ remaining passengers and crew, will be stuck in place until mid-February. The NYT chronicled the growing sense of unease and paranoia aboard the ship, which we cited yesterday.

The ship’s captain Stefano Ravera announced Monday that 66 new cases of the virus had been confirmed, bringing the infection total of passengers and crew to 136, roughly equal to all the other cases in Asia outside China. Media reports have claimed more than 2,500 passengers and crew remain aboard the ship.

According to CNBC, the nationalities of the newly infected are Japanese (45), American (11), Australian (four), Filipino (three), Canadian (one), English (one) and Ukrainian (one). Notably, all of these infections occurred person to person, since they were all spread from ‘patient zero’ to others aboard the ship.

Princess Cruises, the Carnival Japan unit that owns the ship, told NBC News that it was continuing to follow guidance from Japan’s health ministry regarding plans for providing medical care and passengers ultimately disembarking.

Meanwhile, one passenger told the NYT yesterday that those aboard the ship are being left in the dark, and have resorted to tracking the comings and goings of ambulances to try to keep abreast of what’s going on. Many suspect the virus has been spread through the ship’s ventilation system.

The ship was quarantined for two weeks after a passenger who disembarked in Hong Kong on Jan. 25 tested positive for the virus six days after leaving. After initially finding no cases aboard the ship, the cruise line copped to the first ten cases, prompting more intense scrutiny by the Japanese government.

Princess Cruises said it didn’t expect new cases to be confirmed after the beginning of the quarantine, though that has clearly happened.

So far, it doesn’t look like the virus has made the jump from the ship to the surrounding area. If that happens, expect Japanese authorities to resort to the same types of draconian quarantine measures that have been imposed in China.