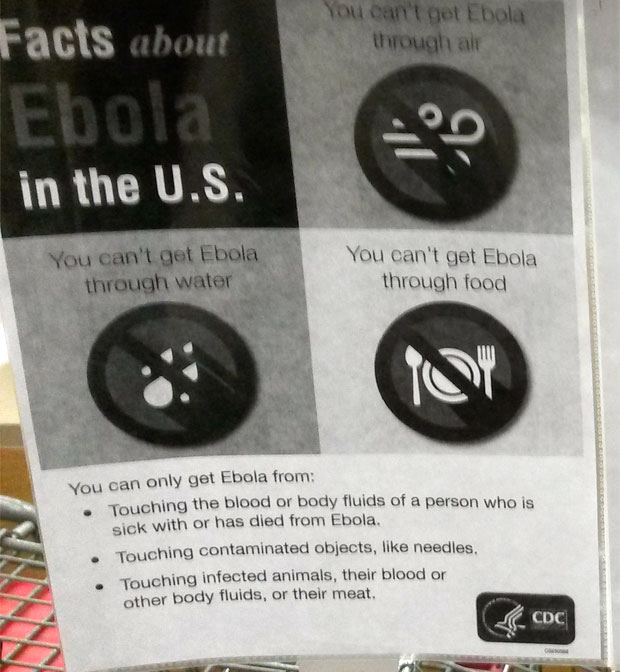 The photo below was sent to Infowars.com today. The email did not indicate where the information was posted.

The CDC sheet claims “You can’t get Ebola through air.” This contradicts statements previously issued by the federal agency.

In August, the CDC directed airline staff to take steps to prevent the spread of “infectious material through the air.” A CDC advisory titled Interim Guidance about Ebola Virus Infection for Airline Flight Crews, Cleaning Personnel, and Cargo Personnel demonstrated the agency is concerned about airborne contamination.

The CDC also admitted the virus may mutate into an airborne strain.

“My biggest concern is that we don’t have enough knowledge about the virus and this outbreak and whether it’s mutated or not,” Dr. Jelinek told ABC affiliate KRGV. Jelinke’s concern is voiced by other high level health professionals.

Associate Professor of Biological Sciences at Purdue University Dr. David Sanders added that Ebola is “primed to have respiratory transmission.” Sanders said the medical community needs “to be taking this into consideration.”

Professors at the University of Illinois in Chicago assert that the Ebola virus has the potential to be transmitted via “infectious aerosol particles both near and at a distance from infected patients,” Infowars.com reported on October 2.

“We believe there is scientific and epidemiologic evidence that Ebola virus has the potential to be transmitted via infectious aerosol particles both near and at a distance from infected patients, which means that healthcare workers should be wearing respirators, not facemasks,” an article  published by CIDRAP, the Center for Infectious Disease Research and Policy, states.

Despite a growing consensus that Ebola is now airborne or may soon mutate into a strain capable of transmission by aerosol particles, the CDC continues to misinform the public about the potential danger of the deadly disease.