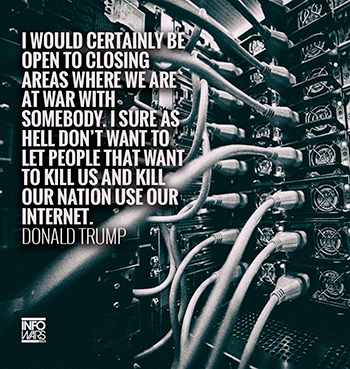 In December presidential frontrunner Donald Trump said parts of the internet should be shut down to prevent terrorism. Hillary Clinton has also proposed taking down the websites and blocking videos and encrypted communications of Islamic militants.

Earlier this week Cyber Command leader Adm. Mike Rogers said during a budget hearing for the agency this would not be possible.

“The idea that you’re just going to shut down the Internet given its construction and complexity is not realistic,” he said in response to a question by Sen. Joe Manchin, a Democrat from Washington. “It’s just not that simple. I wish I could say that there’s a part of the Internet that was only used by a specific set of users.”

Turkey’s authoritarian leader Erdogan found out in 2014 how difficult it is to shut down the internet. Following widespread criticism of his government on social media, the Turkish government tried to block Twitter, but within seconds of Turkey’s telecommunications department taking a “protection measure” to block the popular microblogging site people were changing their DNS settings, using Virtual Private Networks and sending out tweets via SMS (in the latter case, Twitter provided instructions).

The Internet Corporation for Assigned Names and Numbers (ICANN) is responsible for maintaining DNS (Domain Name System) servers and the organization has instituted a system akin to unlocking a nuclear weapon for launch. ICANN selected seven people as key holders and gave each one a computer code that must be paired with codes held by other key holders before the ICANN database can be accessed. Meetings are held every couple years to change to key holder pass codes.

The internet can be blocked, as it is in China, but taking it down in its entirety short of the accessing the ICANN DNS master database would be virtually impossible. But even if the database was sabotaged, many computers would continue to function using direct network connections.

The precursor of today’s internet, ARPANET—Advanced Research Projects Agency Network—was designed by the military to provide communication in the advent of a nuclear war. Packet switching—the dominant basis for data communications worldwide today—allows data to be dynamically routed via different paths in the network. In other words, if data—email or a request for a web page—encounters of problem, it will find its final destination using an alternate route.

Manchin said a common question asked by his constituents is why the government does not simply shut down parts of the internet used by the Islamic State and other terrorists. “I’m not just trying to find an answer, because that question is asked like shut her down, like you do your telephone, but it doesn’t work that way,” he said.