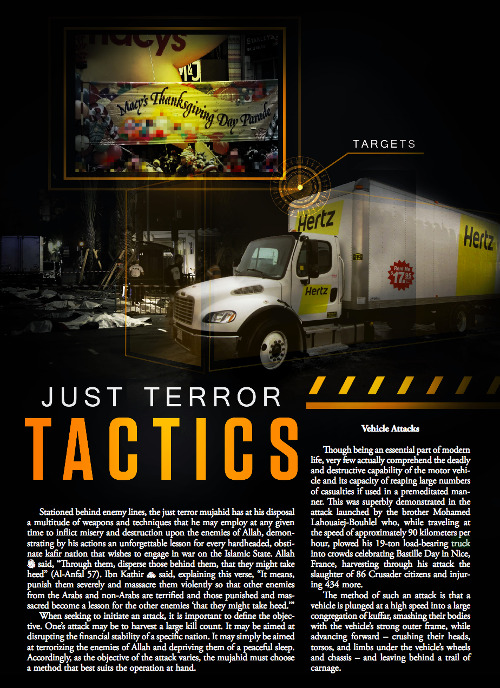 Terrorism is not being ruled out in a gruesome attack on two Washington D.C. police officers and a third victim that mirrored similar ISIS-inspired massacres by jihadists in Europe, where large vehicles are being utilized as the weapons of choice.

The officers were patrolling on bicycles in the neighborhood of Adams Morgan when the driver of a pickup truck rammed them at a high rate of speed, dragging one victim up to 30 feet before crashing into a garbage truck, according to reports.

Witness tells @ABC7TimBarber he saw truck going about 50 mph before it hit people, then garbage truck. Driver, passenger inside that truck

Pickup truck that hit @DCPoliceDept officers crashed into dump truck in front of our house.

Took 5 minutes for 911 to pick up my call. pic.twitter.com/ioYZgPY1Q4

During a press conference, Chief of Metropolitan Police Peter Newsham was asked if the crime was being treated as terrorism, to which he responded, “We have to look at that very closely. We do not have a motive at this time.”

Two suspects were arrested at the scene, and an unregistered firearm was confiscated, according to ABC 7. Unconfirmed reports are that the weapon may have been an AK-47.

The FBI is reportedly involved in the investigation, prompting further speculation regarding the motive.

BREAKING: FBI Has Arrived On Scene After Truck Plowed Into Cops, Pedestrians In DC – https://t.co/L6gypWNIeX pic.twitter.com/KeIRwWsmwc

“On Friday morning, officials say both police officers and the DDOT worker’s conditions were upgraded to stable condition,” reports ABC 7. “Initially, one of the officers was listed in critical condition. The other officer and the DDOT employee, who works as a traffic control officer, were in serious condition, according to D.C. Police Chief Peter Newsham during a press conference Thursday night.”

ISIS has specifically instructed their followers on how to turn large vehicles into mass casualty weapons, and the result has been horrific in attacks on civilians in cities like London, Berlin, Nice, and Stockholm.

“Though being an essential part of modern life, very few actually comprehend the deadly and destructive capability of the motor vehicle and its capacity of reaping large numbers of casualties if used in a premeditated manner,” reads a chilling article in ISIS online propaganda magazine, Rumiyah. “The method of such an attack is that a vehicle is plunged at a high speed into a large congregation of kuffar, smashing their bodies with the vehicle’s strong outer frame, while advancing forward – crushing their heads, torsos, and limbs under the vehicle’s wheels and chassis – and leaving behind a trail of carnage.”

Ramadan is now 14 days old, and Islamists have murdered 995 victims in 21 countries so far, according to TheReligionOfPeace.com – including Saturday night’s horrific slaughter in London that began with a large van crashing into a crowd of pedestrians on London Bridge.