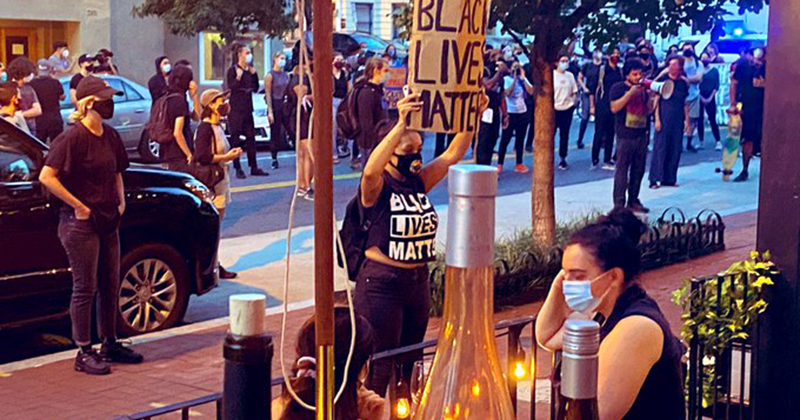 Protesters with Black Lives Matter signs and shirts shouted at diners who were seated on restaurant patios throughout Northwest Washington, DC, over the weekend as part of an “education” campaign.

With many Washington restaurants now featuring patio seating due to coronavirus restrictions, protesters have been increasingly targeting diners now accessible from the streets.

On Saturday, several pro-Black Lives Matter and other associated groups organized to protest throughout Northwest Washington, DC, which includes the affluent Georgetown and Dupont Circle neighborhoods.

As the sun started going down, the protesters first targeted diners at restaurants on P Street NW near Dupont Circle. Protesters shouted into megaphones and held signs that said, “Black Lives Matter,” according to tweets by Deadspin journalist Chuck Modiano.

Modiano also posted a video of an agitated restaurant staff member talking to the protesters.

“Restaurant staff member comes out to argue w/protesters but customer approves,” he tweeted.

“They need to know. Everybody needs to know”

In weeks covering #DCProtests, Black customers are supportive. Many white ppl too. So we must define “angry customer” as a distinctly white issue. pic.twitter.com/P6n16DP0x1