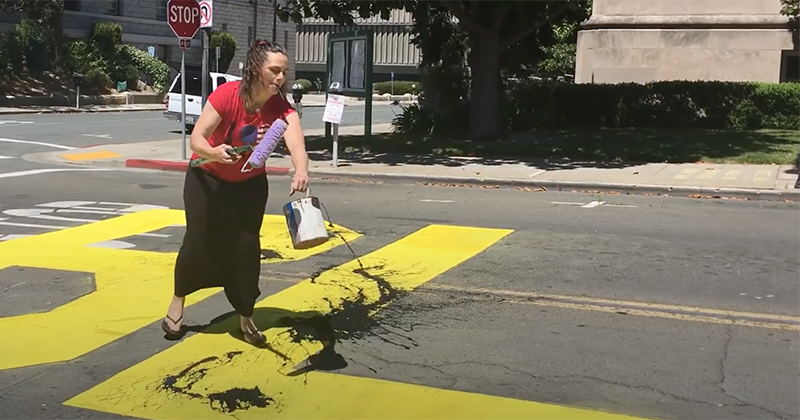 Contra Costa County District Attorney Diana Becton on Tuesday charged the peaceful protesters seen painting over a city-approved Black Lives Matter street mural with a hate crime and is seeking to put them in prison for a year.

Alex Jones breaks down the race war boiling over into churches as angry mobs attack church goers for attending services during a lockdown.

On July 1, a local Martinez resident applied for a permit to paint a Black Lives Matter temporary mural in downtown Martinez in front of the Wakefield Taylor Courthouse. The permit was approved by the City of Martinez and the painting was done on July 4.

Nelson and Anderson arrived at the scene of the mural after it was completed with paint supplies. Anderson started to paint over the yellow letters “B” and “L” in the word “Black.” She used black paint and a large paint roller to do so. The video has been shared widely by witnesses and shared on social media.

“We must address the root and byproduct of systemic racism in our country. The Black Lives Matter movement is an important civil rights cause that deserves all of our attention,” stated Contra Costa County District Attorney Diana Becton. “The mural completed last weekend was a peaceful and powerful way to communicate the importance of Black lives in Contra Costa County and the country. We must continue to elevate discussions and actually listen to one another in an effort to heal our community and country.”

In total, both defendants are charged for the following alleged offenses:

If convicted, both defendants face up to a year in county jail. The alleged offenses are exempt from a specific bail amount due to the current county bail schedule in light of the COVID-19 pandemic.

Becton is vindictively throwing the book at these two to “heal our community and country.”

Leftist are not being prosecuted for rioting, looting and toppling statues all over America but a pair of Trump supporters are being charged with a hate crime and face a year in prison for painting over divisive city-sanctioned graffiti.