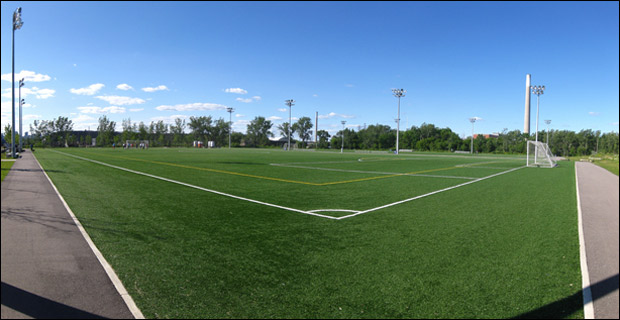 A New Mexico father is asking schools in his area to reconsider their use of artificial turf on sports fields after an NBC News report exposed a possible link between the fields and an increase in student-player cancer rates.

Albuquerque resident Glenn Sveum recently launched a petition calling on the Albuquerque School District to remove synthetic turf from sports fields and to trade them out for fields with real grass.

Sveum grew concerned after reports emerged detailing how synthetic turf fields, made using recycled rubber tires, have been linked to the development of various cancers.

“These are just a few stories related to an emerging threat to America’s Youth,” Sveum’s petition states highlighting a collection of reports. “Especially Soccer players, and specifically Goalkeepers. These new, ‘Water saving’ turf fields are made with recycled tires, ‘Tire Crumbs’ which are used to spread in between the plastic grass blades, apparently to soften impacts. These fields are painful to fall onto and much more painful to slide across.”

“There have been numerous cases of young soccer players, especially goalkeepers, coming down with cancer. Not to mention an increase in basic skeletal injuries.”

Sveum has a vested interest in the removal of the fields. His daughter Aspen is a goalie for her school’s varsity soccer team.

“Someone kicks the field or the ball bounces, you see little clouds of debris pop up,” Sveum described to KOB Eyewitness News. “That is recycled rubber, recycled tires…known carcinogens.”

The tire crumbs end up getting stuck in players’ hair, inside their cuts, and often get inhaled and swallowed.

As Sveum points out, particularly at risk of exposure are goalies. “In practices and games, they make hundreds of dives, and each plunge sends a black cloud of tire pellets into the air,” reported NBC.

Earlier this month, NBC News published a damning exposé which explored many soccer parents’ growing concern with a rumored link between artificial turf and cancer.

Since then, Griffin has compiled a list of 38American soccer players — 34 of them goalies – who have been diagnosed with cancer. At least a dozen played in Washington, but the geographic spread is nationwide. Blood cancers like lymphoma and leukemia dominate the list.

The US Environmental Protection Agency has noted “a number of compounds or materials that may be found in tires,” such as arsenic, benzene, cadmium, and nickel, all of which are known carcinogens proven to cause cancer in both people and lab animals.

The sun’s heat also bakes the rubber fields causing them to emit noxious gases that get inhaled by the players.

“Turf fields can become very hot — 10 to 15 degrees hotter than the ambient temperature – increasing the chances that volatile organic compounds (VOCs) and chemicals can ‘off-gas,’ or leach into the air,” NBC reports.

Despite extensive research into the topic, and despite having an entire page dedicated to “tire crumbs” which specifically notes the fact that “public concerns have been raised over the use of tire crumb materials in turf fields and playgrounds,” the EPA has refused to confirm a cancer link, instead telling NBC news that “more testing needs to be done.”

In fact, the EPA said it “does not believe that the field monitoring data collected provides evidence of an elevated health risk resulting from the use of recycled tire crumb in playgrounds or in synthetic turf athletic fields.”

A day after NBC’s report was published, the Synthetic Turf Council responded saying that “The preponderance of evidence shows no negative health effects associated with crumb rubber in synthetic turf. As NBC factually reported, ‘there is no research directly linking crumb rubber exposure to cancer.’”

In other words, pay no attention to the epidemic of soccer players developing the same kinds of cancer.

The Albuquerque School District responded to Sveum’s petition by repeating the same mantra.

“While the health and safety of all Albuquerque Public Schools students is always of the utmost importance, there is still no conclusive evidence that the rubberized fields are linked to health problems,” they said in a statement to KOB News.

Despite official denials, citizens and municipalities across the country are now taking the potential health threat posed by artificial turf fields seriously, with communities in San Francisco putting the fields up for a public vote, and a school in New Jersey rejecting plans for a future installment of a turf field.