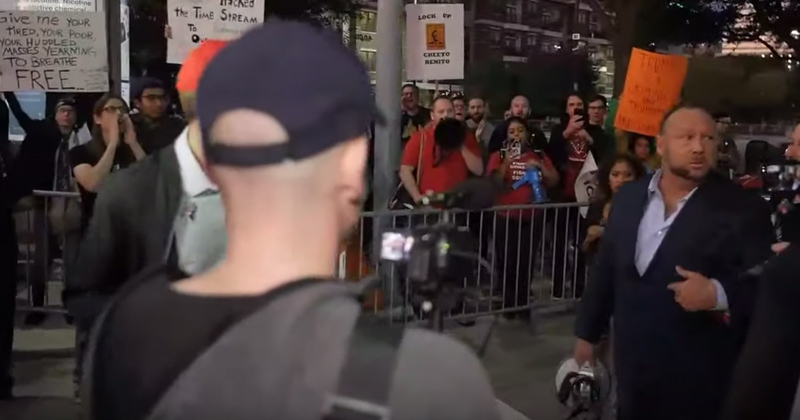 One reporter documented clashes between Trump rally-goers and radical leftists, after which police needed to separate the two groups.

***WATCH***@realDonaldTrump supporters and Antifa protesters clash outside the 7-Eleven near Victory Park.

Police are monitoring as they walk around the area. pic.twitter.com/NqLmcjSKXj

“Dallas Police have formed a barricade around Antifa protesters that placed themselves amongst @realDonaldTrump supporters in Victory Park. Police are now separating them,” reported WFAA’s Matt Howerton.

Dallas Police have formed a barricade around Antifa protesters that placed themselves amongst @realDonaldTrump supporters in Victory Park.

Police are now separating them. pic.twitter.com/bmadCI7Bwk

Antifa mobs protesting a Trump rally pursued Jones and blocked his path while attempting to drown him out with leftist chants, as he continued bull-horning in support of President Trump and in defiance of the globalists.

Go to 27:44 for the Antifa confrontation.

Infowars reporter Rob Dew documented the aftermath of the assault, speaking with Alex and his bodyguard about the massive crowd of around 100 people who were shoving and bumping into them and how the police stood down.

Watch the following video starting at 53:20:

“We had Antifa slapping at me, hitting at me, running into the guys, trying to block us,” Alex Jones said, “and the Dallas police stood down.”

A security guard for Jones who previously worked as a law enforcement officer confirmed he saw at least eight Dallas PD officers who “backed away and let Antifa swarm us.”

“They saw the situation was out of hand and they didn’t step in,” Jones’ security guard noted.

“Trump supporters were basically in an organized fashion just standing outside peaceful, and Antifa started chasing us all around the parking lot.”

Jones added, “This is what families who leave Trump rallies have to deal with when trying to walk to their vehicles.”

This type of violence is typical from Antifa demonstrators, as seen at another Trump rally in Minnesota last week, where even women were assaulted in the streets while trying to go home.

After the @realDonaldTrump rally in Minneapolis, his supporters were attacked by left-wing extremists. An unprovoked assault on a woman was caught on camera by @AlphaNewsMN. Mayor @Jacob_Frey defends charging Trump campaign $530k for public safety. #antifa https://t.co/fGBzUiMMOQ pic.twitter.com/MgbsDh60NR

.@AlphaNewsMN captures moment when a man in a "I Stand with Ilhan Omar" shirt chokes a man who tried to retrieve his stolen MAGA hat. Other antifa people then kick & punch him. He was trying to leave the area after the Trump rally in Minneapolis last week. https://t.co/iEugKxiMoA pic.twitter.com/XDMfVBrZam

Several other assaults by liberal protesters against Trump supporters were also documented that night.

This was not uncommon. #Tolerance pic.twitter.com/374ns5fAJp

Ahead of the rally, another Trump supporter was filming an interview with Vice News when a protester walked by and spat on him.

The volume of material for Trump's 2020 campaign videos continues to grow by the day.pic.twitter.com/4XFhEfdyIR