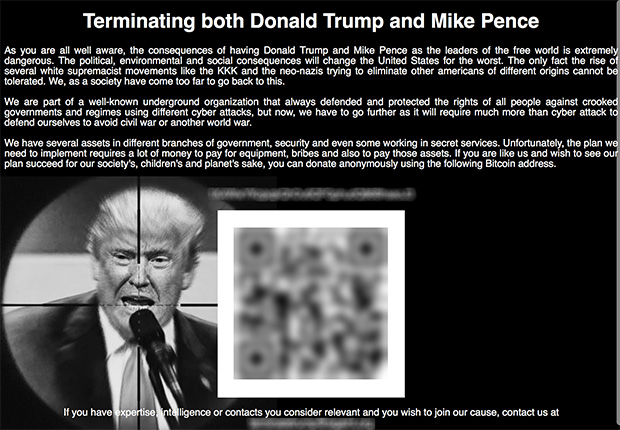 Launched earlier this week, the website warns of the “political, environmental and social consequences” of a Trump presidency before urging readers to assist its cause. 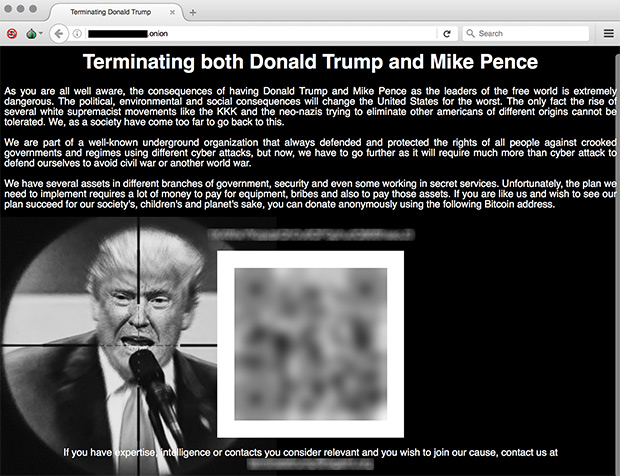 “As you are all well aware, the consequences of having Donald Trump and Mike Prence as the leaders of the free world is extremely dangerous,” the webpage says. “The political, environmental and social consequences will change the United States for the worst.”

The group claims to belong to a prominent “underground organization” that is now shifting tactics from cyber attacks to physical violence.

“We are part of a well-known underground organization that always defended and protected the rights of all people against crooked governments and regimes using different cyber attacks, but now, we have to go further as it will require much more than cyber attack to defend ourselves to avoid civil war or another world war.”

Visitors are asked to donate Bitcoin in order to cover the costs of equipment and bribes, which will be paid to alleged assets throughout the federal government and even the Secret Service.

According to CSO writer Steve Ragan, the group’s Bitcoin wallet has received more than $88,000 since March 2016 – although only $119 has been collected since the assassination website went live.

A Darknet-based email address is also provided for anyone willing to provide expertise or intelligence to the group.

Despite the provocative nature of the website, investigations into crowdfunded “murder-for-hire” Darknet sites have revealed them to be likely scams or run by law enforcement.

Infowars was unable to reach the Secret Service for comment.

Related: The Assassination of Donald Trump