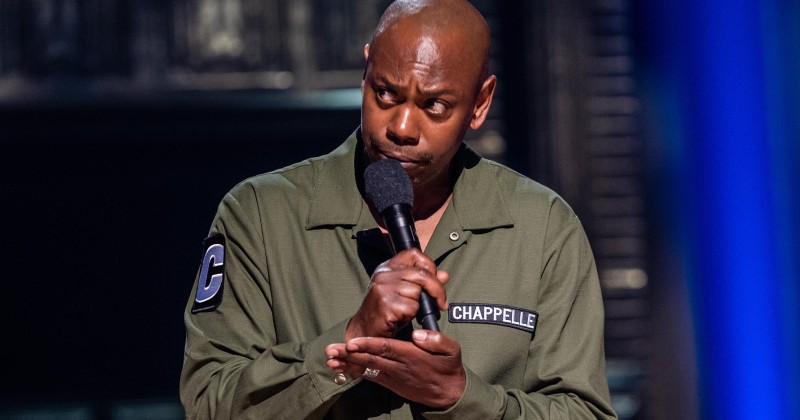 UPDATE: After I posted this, Rotten Tomatoes finally allowed audience scores and the difference is stunning. Americans are sick of being lectured about what they’re allowed to find humorous.

After I posted this, Rotten Tomatoes finally allowed audience scores and the difference is stunning.

Americans are sick of being lectured about what they're allowed to find humorous. pic.twitter.com/j4fV0H3QFn

Dave Chappelle’s new politically incorrect Netflix special is being panned by “critics” yet is loved by the general public, illustrating once again how Americans are sick of being lectured by woke idiots about what they’re allowed to laugh at.

Sticks & Stones, which targets cancel culture, far-left activists and the the #MeToo movement, has a lowly 17% score on Rotten Tomatoes, where only reviews from critics are currently allowed.

However, on IMDB, where regular viewers are allowed to post their own reviews, the show has a rating of 8.5 out of 10.

Chappelle's new show has 8.5 on IMDB (where user reviews are allowed) yet just 17% on Rotten Tomatoes (where all reviews are by "critics").

Americans are tired of being lectured by pedantic 'woke' idiots about what they're allowed to laugh at. pic.twitter.com/kyNgVJ0TS9

Rotten Tomatoes initially gave the show a 0% rating in an apparent attempt to derail any momentum.

The disconnect between the two scores highlights the gaping gulf between ‘woke’ progressives who ruthlessly police the entertainment industry by decrying anything deemed “offensive” and ordinary Americans who are tired of being told what they’re authorized to find humorous.

According to Vox, Chappelle’s show “makes a point of punching down” while the Daily Beast says his jokes are “problematic.”

The woke left, which controls the entertainment industry, uses minority groups as human shields to denigrate, silence and shame anyone who dares challenge their onerous, draconian attempt to police speech and restrict language.

By making fun of the sacred cows progressives use to socially engineer society, Chappelle is directly targeting hysterical hate mobs backed by corporate power who are trying to take over the culture and turn comedy into a bland, sanitized borefest.