“It appears that the problem was that CBS included a very confusing quote without context,” writes Sarah Rumpf. “Hogg was on campus during the shooting and returned several hours later to interview people across the street.”

Anti-gun activist David Hogg made contradictory statements about where he was when the Parkland shooting took place, based on several video interviews.

For example, in this interview, Hogg describes being in an “AP environmental science” class when he heard gunshots, which he claims prompted his teacher to shut the door.

“So yesterday I was in my AP environmental science class, we had taken out all of our notes and we’re about to pack up to leave school and we hear a ‘pop’ and it happened to be a gunshot that echoed through the hallway,” Hogg told MSNBC last month. “And because of that, my teacher actually went and closed the door but as soon as she closed the door the fire alarm was pulled so this sick man could get more soft targets.”

He repeats the story, more or less, in this video:

But in another interview with CBS News, Hogg says he was at home during the shooting, and had to ride his bike several miles to get to Marjory Stoneman Douglas High School to “get as much video as he could” of the event.

“On the day of the shooting, I got my camera and got on my bike and rode as fast as I could three miles from my house to the school to get as much video and to get as many interviews as I could because I knew that this could not be another mass shooting.”

These contradictions aren’t unusual for Hogg.

As we reported, Hogg couldn’t get his story straight when recalling how many of his sister’s friends died in the shooting, and one of his first interviews with local media showed him repeatedly flubbing his talking points.

In an even more bizarre twist, Hogg apparently interviewed students during the shooting in a closet, which doesn’t support his story he rode his bike three miles after he first heard about the shooting. 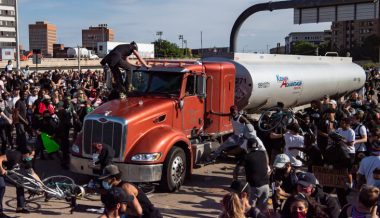