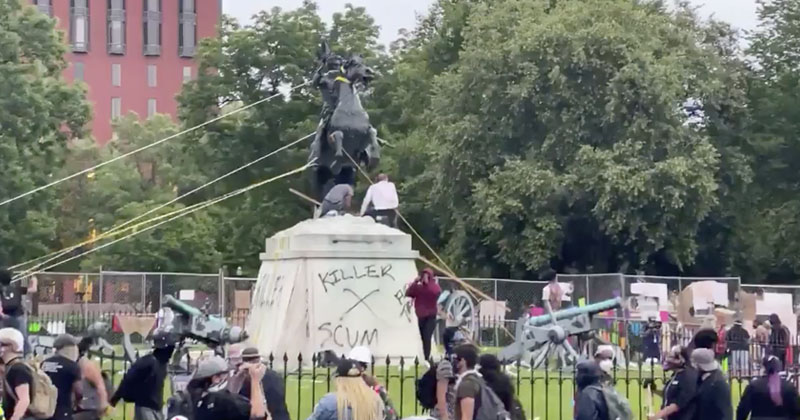 DC Police and Secret Service descended on rioters who were trying to topple an Andrew Jackson statue and establish another “autonomous zone” near the White House.

Black Lives Matter and Antifa rioters swarmed Lafayette Park on Monday night, tried to establish what they called a “Black House Autonomous Zone” and tear down a statue of Jackson riding a horse.

This is immediately prior to the police retaking the area. They weren’t even close to bringing it down. pic.twitter.com/Li5ojEOEpl

The rioters chanted of “Hey, Hey, Ho, Ho, Andrew Jackson’s got to go” while defacing the monument of the 7th U.S. president prior to the confrontation between rioters and police.

#BREAKING: Protesters have opened the fence surrounding the Andrew Jackson statue in Lafayette Square and have climbed on top.

I’ve heard them say they’re trying to tear it down. @wusa9 #BlackLivesMatter pic.twitter.com/i8cBlM171b

Police have arrived at the White House where protesters were trying to tear down a statue and build an autonomous zone. Tensions are high: pic.twitter.com/TFnkOR8cs6

This is the recent scene outside of the White House in Lafayette Park. Police are firing pepper bullets into the crowd to push everyone back. (via @nathan_luft.)
pic.twitter.com/WgSZGZmcI0

WATCH: Clash with the police near the Andrew Jackson statue in Lafayette Park right across the street from the #whitehouse #autonomouszone #blackhouse #TheGeorgeFloydProtestThread pic.twitter.com/7AGPm5GIlt

The scene in Lafayette Park outside the White House.

Right outside the White House where Parks Police and DC Police have pushed people out of Lafayette Park. Pepper spray is in the air. pic.twitter.com/snjOFwjRr8

The authorities took back control of the park by the evening, but the “protesters” continued agitating and assaulting police while they stood guard around the park.

More video of protesters taunting police outside of Lafayette Park in D.C.

Something happened, I think a bottle was thrown, and cops used pepper spray. pic.twitter.com/hVU7CBXjs3

The Marxist agitators also tried establishing a new “autonomous zone” outside of the historic St. John’s Episcopal Church just blocks from the White House, which DC police have yet to break up.

The zone is inspired by the one set up in Seattle, which has been rife with violence, thefts, lawlessness, and murder with the endorsement of Seattle’s Democrat leadership.

Antifa clowns are trying to set up a "Black House Autonomous Zone" in Washington DC just blocks away from the White House. pic.twitter.com/XvYvxMXK5M

Standoff in front of the White House/next to the church (the church has been vandalized and reads BHAZ, the symbols of the autonomous zone they tried to create) pic.twitter.com/CQWFfNPEFH

The BLM rioters also lit fires in the street when it became clear they weren’t going to retake the park.

Some in the crowd started a fire in the street and wanted others to make it bigger. Other people said it was a bad idea and put it out. The people who wanted to keep the fire going got upset. pic.twitter.com/QC6i53nglF

Another fire was started in the street. They told someone with a camera to put it down to stop filming. pic.twitter.com/uAq2HnItTf

A scuffle between D.C. protesters broke out just outside the new “zone.” pic.twitter.com/n8j3xFNE5e

The press has reportedly been ordered to leave the White House as the confrontations between rioters and police grew more violent.

“Numerous people arrested in D.C. for the disgraceful vandalism, in Lafayette Park, of the magnificent Statue of Andrew Jackson, in addition to the exterior defacing of St. John’s Church across the street. 10 years in prison under the Veteran’s Memorial Preservation Act. Beware!” Trump tweeted.

Numerous people arrested in D.C. for the disgraceful vandalism, in Lafayette Park, of the magnificent Statue of Andrew Jackson, in addition to the exterior defacing of St. John’s Church across the street. 10 years in prison under the Veteran’s Memorial Preservation Act. Beware!