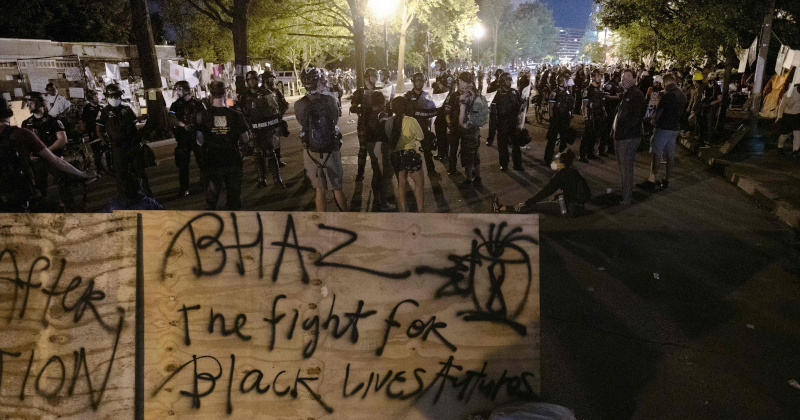 Police bombarded protesters with pepper bullets, tear gas and flashbangs during yet another night of violent clashes in downtown Washington DC, fulfilling President Trump’s vow to use ‘serious force.’

Multiple eyewitness videos from the scene show the ensuing chaos as Black Lives Matter protesters were cleared from the streets by police using multiple forms of non-lethal munitions, indiscriminately hosing the crowds with pepper spray and bullets, before launching barrages of flashbangs.

Total chaos outside the White House as cops pepper spray everyone in range. I was around 25 ft away and just got hit pic.twitter.com/buOFvrWHGl

One group of protesters was filmed setting an American flag on fire.

The clashes came after DC Police cleared out an area of tent encampments early on Tuesday morning, ahead of the planned reopening of H Street. Protesters also marched from BLM Plaza to block the i-395 highway tunnel, while barricades were reestablished around Lafayette Park, having been torn down by police two weeks ago.

Two people were arrested and four police injured during Monday night’s chaos, while numerous protesters were treated at the scene for exposure to pepper spray, pepper bullet impacts and other injuries.

On Tuesday, US President Donald Trump vowed to use “serious force” if any protesters, anarchists or activists attempted to replicate the now notorious ‘autonomous zones’ seen in Seattle and Portland.

Trump’s threat came on the same day a Democratic representative and a CNBC reporter were accosted in the so-called ‘Black House Autonomous Zone’ near the White House.