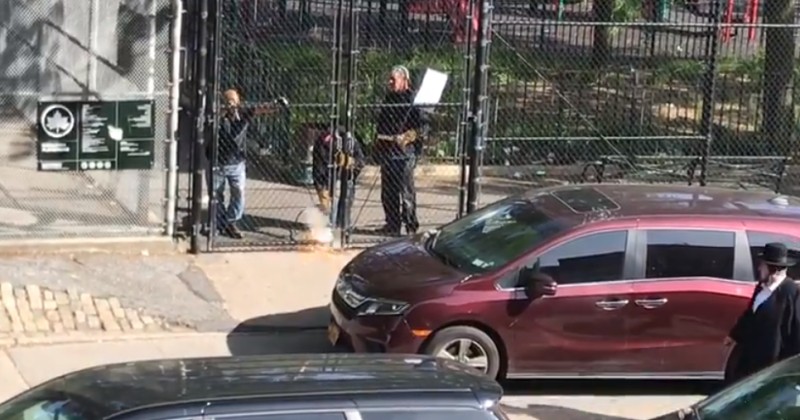 “Bill de Blasio is Welding the gates at the biggest park in the Jewish community, (Borough Park, Brooklyn) So your child shouldn’t try to break in,” tweeted Joel Fischer. “While Hundreds of thousands of people gathered yesterday at Brooklyn Museum.”

Yes. This is actually happening now!

Bill de Blasio is Welding the gates at the biggest park in the Jewish community, (Borough Park, Brooklyn) So your child shouldn't try to break in. While Hundreds of thousands of people gathered yesterday at Brooklyn Museum.#deBlasioMustGo pic.twitter.com/Q02ew5O5nZ

While de Blasio desperately tries to keep children out of a local park, he is simultaneously allowing numerous Black Lives Matter demonstrations to take place, including one yesterday that was attended by thousands of people.

Hey Deblasio (sorry, I meant Kaiser Warren Wilhem), how do you explain the mass gathering outside the Brooklyn Museum the other day? Oh right, I forgot, cause it's only the Jews that you want to go after. pic.twitter.com/P9fuBmRLjq

The Mayor previously faced criticism for ordering police to break up a large funeral gathering in Brooklyn attended by hundreds of Orthodox Jewish mourners.

As we highlighted earlier, de Blasio has also instructed COVID-19 contact tracers to not ask people if they attended BLM protests.

By keeping this information hidden, authorities will be able to avoid blame if there is a second spike in coronavirus cases.