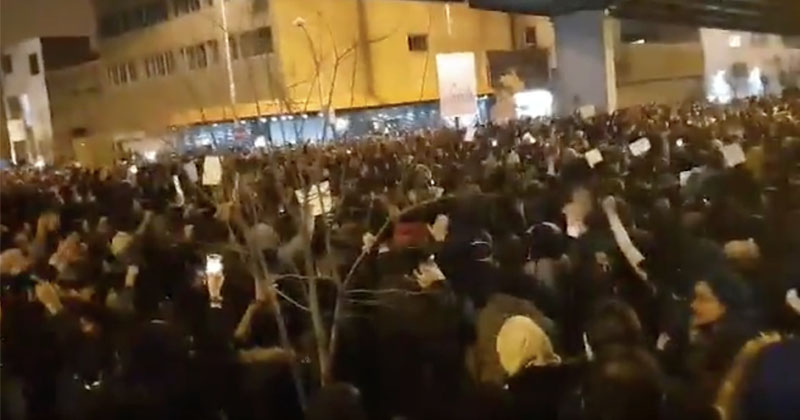 Numerous videos posted to social media show student protests erupting across Iran after the Iranian Revolutionary Guard took responsibility for shooting down a passenger jet over Tehran that killed 176 civilians.

According to translations posted with the videos on Saturday, the protesters are demanding the resignation of Supreme Leader Ayatollah Khamenei.

Chants of “Death to the dishonest Supreme Leader" break out at a protest in Tehran.

The protesters, believed to be in the thousands, could also be heard chanting, “Our enemy is here, they tell us lies by saying it is America,” and “I will kill those who kill my brother.”

Protests are reported in Tehran's Sharif University as well. Students are chanting : "Khamenei have some shame! Get your hands off our country".

Iranians are furious with the regime after it shot down a civilian aircraft due to recklessness that claimed more than 176 lives pic.twitter.com/cIc9pX9Ntm

Chants of می‌کشم، می‌کشم، آن که برادرم کشت – which roughly translates to "I will kill those who killed my brother." Protests in #Iran following the government admitting it shot down the Ukrainian airliner by mistake.

They rocked the plane, killing 180, and now beating protesters with tear gas and batons.
Welcome to Iran!#Iran_protests pic.twitter.com/7EeaxDOwap

Solidarity against authoritarian rulers is beautiful.

In this video sent from Tehran, people are chanting to encourage each other to support this movement.

Cars going by are joining in by hooting their horns

In this video, protesters are reportedly chanting, “Khamenei shame on you. Let go of our country!”

THOUSANDS of young Iranians – mostly women – surround a statue of the Ayatollah and chant against the Supreme Leader:

“Khamenei shame on you.
Let go of our country!”

Leftist media breathlessly covered the funeral of a terrorist – will they cover this?pic.twitter.com/tVZnSnsrXh

"I kill I kill Who kill my brother" https://t.co/0zpTxUb6Gm

"IRGC, shame on you. Let go of our country"

The protests come just hours after Iran finally admitted to shooting down Ukrainian jetliner PS752 outside of Tehran earlier this week as the regime fired retaliatory missiles at U.S. military bases in response to the killing of their Gen. Qassam Soleimani.

Iran had taken steps to cover up the incident, but the public outcry was too great to dismiss.

The Islamic Republic of Iran deeply regrets this disastrous mistake.

My thoughts and prayers go to all the mourning families. I offer my sincerest condolences. https://t.co/4dkePxupzm

Though the Iranian people seem to know who to blame for the “disastrous mistake,” the U.S. mainstream media decided instead to blame President Trump for Iran’s downing of the jetliner.

Alex Jones exposes the cover-up in action as the Iranians bulldoze the evidence of the downed Ukrainian airliner, much like the way the evidence was destroyed after 9-11.