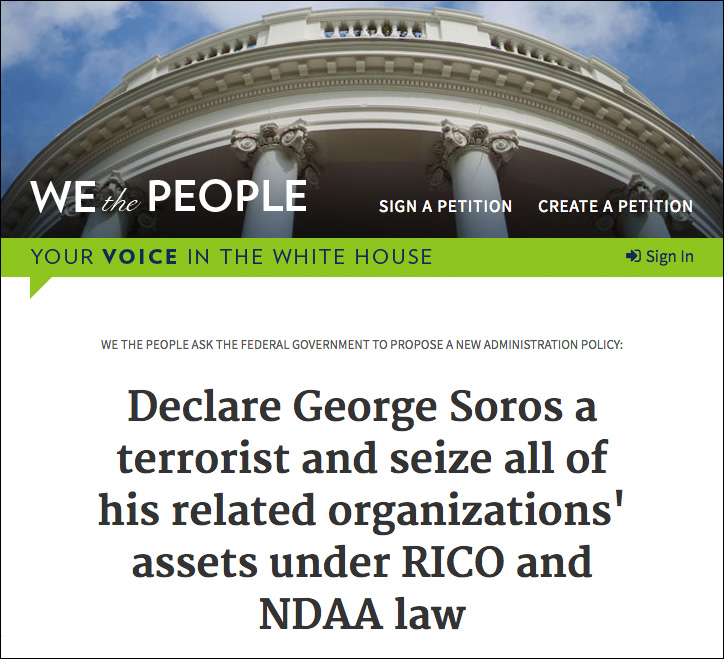 A petition to “Declare George Soros a terrorist” already has over seventy-five percent of the signatures needed to receive a response from the White House.

The petition, posted on WhiteHouse.gov on Aug. 20th, states Soros has “willfully and on an ongoing basis attempted to destabilize and otherwise commit acts of sedition against the United States and its citizens.”

It also demands the U.S. Department of Justice “immediately declare George Soros and all of his organizations and staff members to be domestic terrorists, and have all of his personal an organizational wealth and assets seized under Civil Asset Forfeiture law.”

“[George Soros] has created and funded dozens (and probably hundreds) of discrete organizations whose sole purpose is to apply Alinsky model terrorist tactics to facilitate the collapse of the systems and Constitutional government of the United State, and has developed unhealthy and undue influence over the entire Democrat Party and a large portion of the US Federal government.”

The “Alinsky model” mentioned is a reference to Saul Alinsky’s book, “Rules For Radicals,” in which he outlines a number of ways to influence community organizers and gain their trust – just as Soros has done time and time again with groups such as Black Lives Matter, ANTIFA, and others.

However, it’s not Soros’ charm that wins him over with organizers and protesters — it’s his money.

Shepard Ambellas is an opinion journalist, analyst, and the founder and editor-in-chief of Intellihub News & Politics (Intellihub.com). Shepard is also known for producing Shade: The Motion Picture (2013) and appearing on Travel Channel’s America Declassified (2013). Shepard is a regular contributor to Infowars. Read more from Shep’s World. Follow Shep on Facebook and Twitter.