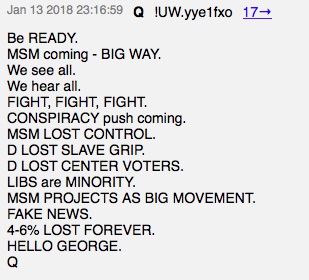 WASHINGTON, D.C. – The Deep State has begun a counterattack to distance itself from the Fusion GPS dossier in a move that was predicted by QAnon on Jan. 13.

In a C-Span interview broadcast on Jan. 15, New York Times reporter Scott Shane, a specialist who reports primarily on the U.S. intelligence community, argued the Fusion GPS was a product of Russian intelligence disinformation designed to mislead the FBI, not a product of Clinton campaign opposition research that served as the basis for the DOJ obtaining FISA court approval to conduct electronic surveillance of Donald Trump, his campaign officials, and top players in the transition team.

QAnon warned in the Jan. 13 post to “be ready” because the mainstream media was coming in a “big way” with a “conspiracy push.” 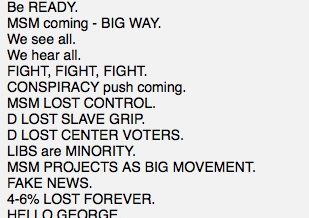 A thread posted on Twitter by @GalacticRedPill analyzed Shane’s interview with C-Span, commenting:

The premise Shane lays out, as a hypothetical, is that the dossier and the Neo-McCarthyist hysteria it unleashed against 45 is actually the product of a Russian disinformation campaign.

The conclusion @GalacticRedPill draws is that this shift in strategy by Deep State operatives is a communication from the Clinton and Obama camps to President Trump and Attorney General Sessions that they are willing to make a deal.

With House Intelligence Chair Devin Nunes preparing to release proof the FBI and DOJ used the Fusion GPS dossier to trick the FISA court into authorizing electronic surveillance of Donald Trump and his top advisors, the Deep State conspiracy is a plan to deflect Nunes “by claiming the black hats who did break the law to illegally unmask team trump were only doing so because they were tricked.

They are terrified, they are terrified right now.  They did not expect Trump to do what he is doing now.  The reason they tried to get him even before he was elected is they knew he was uncontrollable, and they knew if he got in there, they would not be able to manipulate him, and that is exactly what’s happening.

There are some people, and there is no doubt about it, that are running scared right now…

Donald Trump is questioning the Deep State and the shadow government.  He’s rocking that place left and right.  The news media is terrified of that.  Their editors are telling them to attack him just like they are attacking him from the inside.  It’s just dirty pool because they want him taken out.

Shipp concludes: “Trump’s making tremendous progress despite tremendous resistance.  They have already done a character assassination on him, and I think they could go further than that.  Trump is making progress, and he has them running scared.”