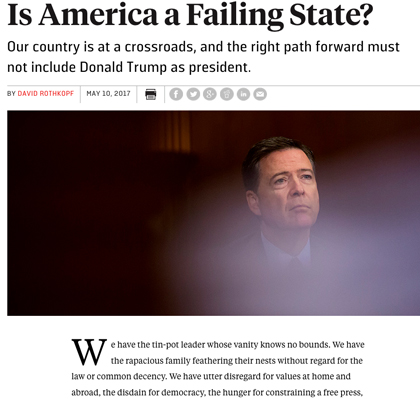 The shadow government is once again pushing its months-old agenda to overthrow Trump, this time using Tuesday’s firing of FBI Director James Comey as the casus belli.

Not long after the news broke that Comey was sacked, a nasty article appeared in Foreign Policy – a premiere globalist mouthpiece – demanding the removal of Trump from office, and “the sooner the better” because America is a “failing state.”

“It will require a bipartisan commitment to truth and justice,” Foreign Policy’s David Rothkopf wrote. “Ultimately, and the sooner the better, it will require our system and people to reject Trump and those surrounding him — who have already done so much to disgrace the offices they hold and undermine America’s standing in the world.”

The article is heavily biased even for Foreign Policy’s standards – Rothkopf calls Trump a “tin-pot leader” who displays a “deeply worrisome” pattern of behavior.

Ironically, he also claims Trump is now acting “more brazenly and desperately,” which actually aptly describes the anti-Trump articles coming out of Foreign Policy and other globalist-oriented magazines as of late.

But what’s really significant in the article is Rothkopf describing the U.S. under Trump as a “failing state,” which in itself sounds like hyperventilating rhetoric except for the fact that the deep state is trying to use a “continuity of government” (COG) mechanism already in place to overthrow the entire Trump administration.

To do that, the globalists need to convince the public the US is a “failing state.”

As Infowars’ Clifford Cunningham reported on May 5, Congress was already holding secret meetings about removing Trump from office.

Interestingly, he based his report on an article by the New Yorker, which, like Foreign Policy, cheerleads the policies designed by the upper echelons of establishment power.

“Nobody occupies the White House without criticism, but Trump is besieged by doubts of a different order, centering on the overt, specific, and, at times, bipartisan discussion of whether he will be engulfed by any one of myriad problems before he has completed even one term in office—and, if he is, how he might be removed,” wrote the New Yorker’s Evan Osnos.

And as I reported in March, The Atlantic, another globalist magazine, was also trying to publicly sell the idea of a coup against Trump using COG measures.

“…If the election had been stolen, Pence’s place as president would be no more legitimate than that of Trump,” wrote The Atlantic’s Norm Ornstein. “After Pence — Paul Ryan, the speaker, followed by Orrin Hatch, the president pro tem, followed by Secretary of State Rex Tillerson.”

Of course the article failed to mention Hillary Clinton’s deep ties to Russia – the Clinton Foundation brokered a deal giving Putin 20% of US uranium production, according to the N.Y. Times – but that doesn’t matter because the Trump/Russia conspiracy is a fake narrative used to delegitimize Trump because the deep state’s presidential pick, Hillary Clinton, fell short of the presidency.

The ruling elite can’t fully control Trump like they could have with Clinton, and that scares them.