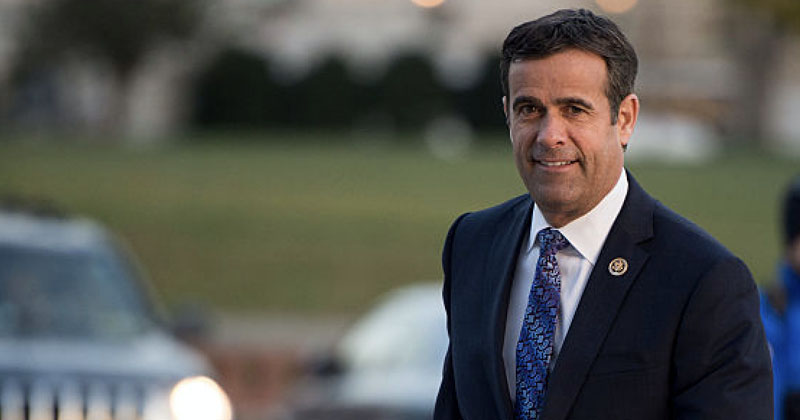 The globalist combine of Democrats and mainstream media are melting down over President Trump nominating John Ratcliffe (R-Texas) as Director of National Intelligence.

“What I do know as a former federal prosecutor is it does appear that there were crimes committed during the Obama administration,” Ratcliffe said Sunday.

Brennan, who frequently tweets over-the-top attacks against Trump and his administration, was one of the first to go after Ratcliffe.

Dan Coats served ably & with deep integrity. Ratcliffe showed abject subservience to Trump in Mueller hearings. The women & men in the Intelligence Community deserve a leader like Coats who puts nation first; not a servile Trump loyalist like Ratcliffe. https://t.co/fbYgS3MoOM

House Speaker Nancy Pelosi called the ousting of Dan Coats as DNI “bad news for the security of America.”

“The departure of DNI Coats is bad news for the security of America. His successor must put patriotism before politics, and remember that his oath is to protect the Constitution and the American people, not the President,” Pelosi tweeted Monday.

The departure of DNI Coats is bad news for the security of America. His successor must put patriotism before politics, and remember that his oath is to protect the Constitution and the American people, not the President. https://t.co/uxLySjxtCm

It’s clear Rep. Ratcliffe was selected because he exhibited blind loyalty to @realDonaldTrump with his demagogic questioning of Mueller.

If Senate Republicans elevate such a partisan player to a position requiring intelligence expertise & non-partisanship, it’d be a big mistake. https://t.co/2uYP8vD39o

From day one, Trump has made his disdain for the intelligence community clear. Our Director of National Intelligence should be above partisan politics, speak truth to power, and resist Trump's abuses of authority. John Ratcliffe doesn't fit that bill.https://t.co/VG10AZPGz0

.@brhodes says "If you don't have intel people who can speak truth to power you're not going to make good decisions and you're also not going to be trusted around the world." #AMRstaff

Coates — Russia is attacking America
Trump — Shut up and go away

Ratcliffe — Mueller is being mean and unfair to our dear leader.
Trump — You're hired. https://t.co/yylnKJKMkk

You might remember Rep. John Ratcliffe from last week’s Mueller hearings, where he put forth conspiracy theories and made clear he is in no way the person for this job.

And of course, how could the liberal outrage be complete be without the dying mainstream media to drive the anti-Ratcliffe narrative home?

Chuck Schumer assessed that Coats' replacement, Rep. Ratcliffe, was selected solely for his "blind loyalty to Trump." This is autocracy, https://t.co/BzzZ0HT1cG

Does it worry Republican senators that Trump just nominated a congressman who delivered one of the most intellectually dishonest (or downright stupid) performances in the Mueller hearings? It should. https://t.co/ydIIhcdh3g

Coats is getting ousted for taking steps to prevent foreign attacks on American elections if you want to know how things are going https://t.co/IHSUXTDYXS

Note that Trump's stooge Ratcliffe is coming aboard as ODNI at EXACTLY at the moment Democrats are beginning their fight to access the FBI counterintelligence report detailing how Trump colluded with multiple foreign governments and may yet be a clear danger to national security. https://t.co/u5ZeI0e0c0

John Ratcliffe, by one measure the second most conservative member of Congress, appears to believe that the Russia investigation was cooked up by Democrats who “committed crimes.” Now Trump reportedly is considering placing atop the US intelligence community.

I heard Ratcliffe say the Mueller report was authored by “Hillary Clinton’s…defense team.” This kind of idiotic conspiracy-theory nonsense disqualifies him to be Director of National Intelligence (he lacks the requisite intel experience, judgement and allegiance to the truth). https://t.co/T2aeeewVOw

You know it’s going to happen under Ratcliffe

Sen. Chris Murphy on John Ratcliffe's DNI nomination: "He's a television character that the president has watched on TV. And he wants to put somebody in this position who's going to agree with his political take on intelligence …it strikes me as an inappropriate choice." @MSNBC

I heard Ratcliffe say the Mueller report was authored by “Hillary Clinton’s…defense team.” This kind of idiotic conspiracy-theory nonsense disqualifies him to be Director of National Intelligence (he lacks the requisite intel experience, judgement and allegiance to the truth). https://t.co/T2aeeewVOw

Not sure what Ratcliffe is talking about on his website here, since I don't see any prosecutions when he was US atty: "As a U.S. Attorney and federal terrorism prosecutor, Ratcliffe put terrorists in prison…" https://t.co/YpgwhPZlUz

When THIS MANY DC Swamp creatures are up in arms over an intel nominee, you can bet he’s probably going to execute his duties by the book, and get to the bottom of any REAL crimes that had been committed.