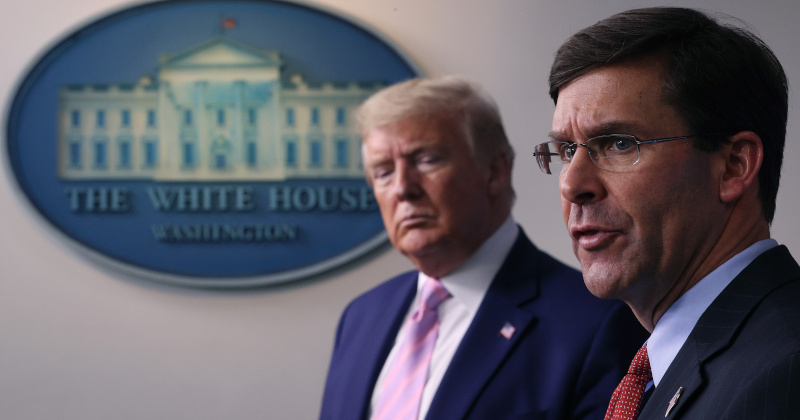 US Defense Secretary Mark Esper said during a Wednesday press conference that he does not support using the Insurrection Act which would allow President Trump to activate the US military for domestic law enforcement during violent, nationwide protests which have turned into riots in major cities.

“I’ve always believed and continue to believe that the National Guard is best suited for performing domestic support to civil authorities in these situations in support of local law enforcement,” said Esper.

“I say this not only as secretary of Defense, but also as a former soldier and a former member of the National Guard, the option to use active duty forces in a law enforcement role should only be used as a matter of last resort and only in the most urgent and dire of situations,” he added. “We are not in one of those situations now. I do not support invoking the Insurrection Act.”

NEW: Defense Sec. Esper: "I do not support invoking the Insurrection Act."

“The option to use active-duty forces in a law enforcement role should only be used as a matter of last resort and only in the most … dire of situations. We are not in one of those situations now.” pic.twitter.com/GcMBjs73rI

On Monday, NBC News reported that President Trump was considering invoking the 212-year-old federal law that would allow him to deploy active-duty US troops in an effort to control riots spreading across the United States which were sparked by the death of George Floyd, an African American who died in police custody after an officer knelt on his neck for over eight minutes.

Speaking outside the White House, Trump said that if the nation’s governors don’t call up National Guard troops to “dominate the streets,” that “I will deploy the United States military and quickly solve the problem for them.”

Trump pledges to deploy U.S. military if states are unable to quell "riots and lawlessness."

The president says he is an ally of all peaceful protesters following the death of George Floyd, but denounces "domestic terror." https://t.co/kI2lRv5jf4 pic.twitter.com/ROlftyB7QR


Meanwhile, rumor has it the White House isn’t pleased with Esper, “to put it mildly.”