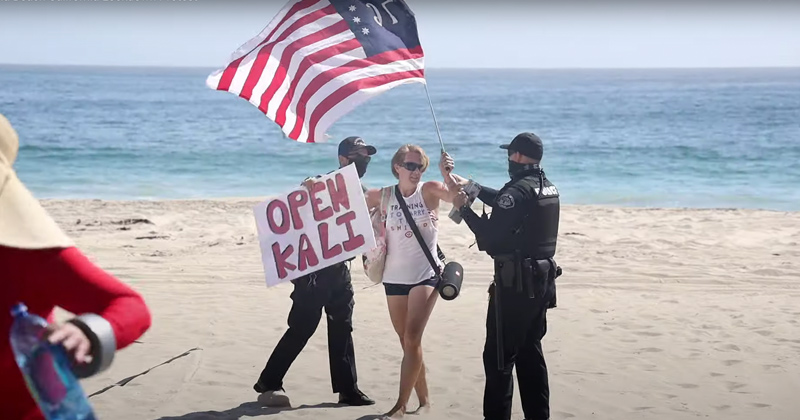 Footage out of California shows a patriotic crowd come to the defense of a lone female protester after police threaten to arrest her for violating lockdown orders.

In the video, a woman carrying a “1776” flag and carrying an “Open Kali” sign dares to venture out onto the surf before two police officers approach her, grabbing her by the arms in attempts to arrest her.

This is awesome! It is in Venice, CA. One patriotic woman breaches. The cops go to arrest, and then everybody breaches! They can't arrest them all! This is the way it's done. pic.twitter.com/PpPPFx6UQC

The woman is next seen kneeling on the beach arguing with police who’ve taken her flag, as protesters filming begin yelling at the cops and invading the beach. 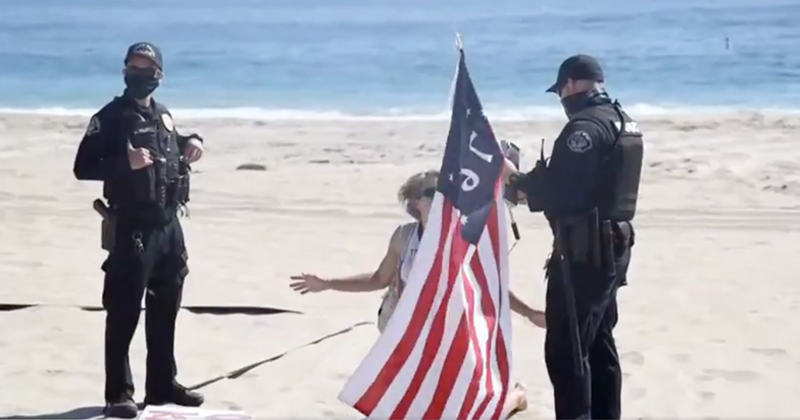 As the cops appear to stand down while conversing with other protesters, more people begin walking past the officers towards the beach.

“The breach has been opened!” one man yells.

Later, the woman who was initially approached by officers evades them and reveals a swimsuit before jumping into the ocean and urging others to do the same.

“That’s the girl right there,” the man filming says.

“She opened the beach,” another man says.

The woman was hailed as a hero on social media.

“One patriotic woman breaches. The cops go to arrest, and then everybody breaches!” wrote Twitter user Susan St. James. “They can’t arrest them all! This is the way it’s done.”

Watch the full video below:

We’re in this together!