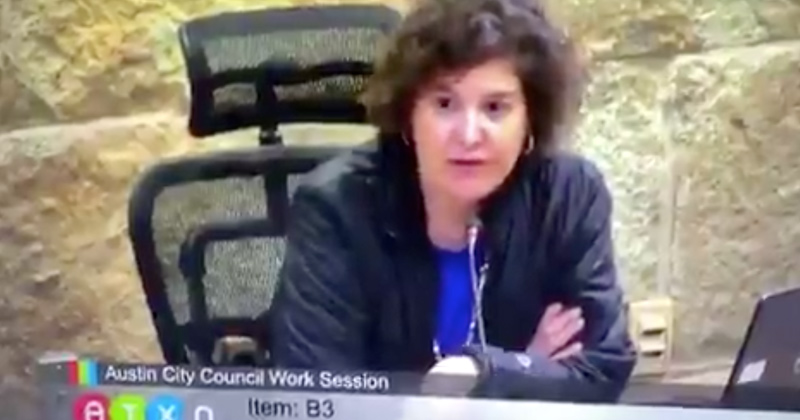 A city council member is being blasted for suggesting used needles found at homeless encampments throughout Austin, Texas, could be insulin.

In footage from a city council work session this week, council member Alison Alter denies that used syringes being found at camps around Austin are due to illicit drug use, claiming many homeless use needles for “health reasons.”

Just one of the moments from 2-4 work session, about the large number of syringes at the 183 & Cameron rd. encampment fire this week. #ATX #Homeless #IsSheSerious #delusional or #stupid @GregAbbott_TX pic.twitter.com/XCdxYh6xAx

As if realizing the absurdity of her argument, the councilwoman added, “That doesn’t make them safe to be on the ground, but that is one of the reasons that you may be finding those in those areas.”

Austin residents criticized Alter’s comments on social media, with one person pointing out insulin would have to be refrigerated.

@ALTERforATX
Would you be ok with going to the doctor's office and seeing needles thrown on the floor?

Honestly, it doesnt matter what the needles are being used for, they should not be all over the ground! https://t.co/4gn7p3B3gN

Has to be the dumbest thing I have ever heard from a public official.This crap is a perfect example of @austintexasgov hazardous policies tearing apart our city. @MayorAdler and this #ATXCouncil are not working in the public’s best interest. @GregAbbott_TX @KVUE @statesman

Yeah, homeless people are really up on taking good care of their health. In no way could this have anything to do with the seedy underbelly of the drug culture. pic.twitter.com/buhceuNqhV

Just a few holes in this excuse:
• Insulin needs to be refrigerated • It is also expensive • Vagrants don’t carry health insurance • Diabetics have biohazard containers and THEY USE THEM • Only a drug addict who just blasted a shot of dope throws their needles on the ground.

@Alison_Alter What planet do you live on? Why don’t we take a field trip to an encampment and see for ourselves if those needles are for insulin. 🙄

Just more mindless BS @ATXCouncil and the Homeless Industry feeds you to coverup the fact that these are the drug addicts they want taxpayers to foot the bill and house permanently.

#ATXCouncil is delusional. They must live in an alternate realty of privilege to seriously believe the needles are for insulin. Says a lot about their total lack of understanding of what is going on in this city. @Alison_Alter

Are you kidding me? Just when I thought that the Austin City Council could not be dumb enough, they go and prove there are no limits to their stupidity. Recall Adler and his city council members. Adler you and your council are morons. @MayorAdler pic.twitter.com/befCAL0GRQ

@Alison_Alter did you really just try to tell everyone that the needles found at the homeless encampment was for insulin? This is an outright shameless lie. Your name can easily be added to recall efforts keep it up. https://t.co/r43CpgF8ft

She can’t actually believe anything she just said out loud. Surely no one is that clueless.

“What planet do you live on?” one woman asked on Twitter. “Why don’t we take a field trip to an encampment and see for ourselves if those needles are for insulin.”

The councilwoman’s comments come in the wake of a fire that broke out at a massive subterranean homeless camp the size of three football fields in North Austin this week.

Gov. Greg Abbott has been a vocal critic of the city council’s homeless policies, which include allowing homeless people to camp anywhere in the city.

Last October, Governor Abbott pointed out a massive trove of used syringes found at a homeless camp during a clean-up effort organized by a group of Trump supporters in Austin.

Late last year, the governor acted on the crisis by ordering the construction of a temporary homeless shelter meant as an alternative to camping on city streets.

An Austin homeless camp the size of 3 football fields caught fire a week after the people announced they were self-governing. Similar in fact to Monty Python’s Holy Grail’s “autonomous collective” and the dumpster fire of the Iowa Democrats.