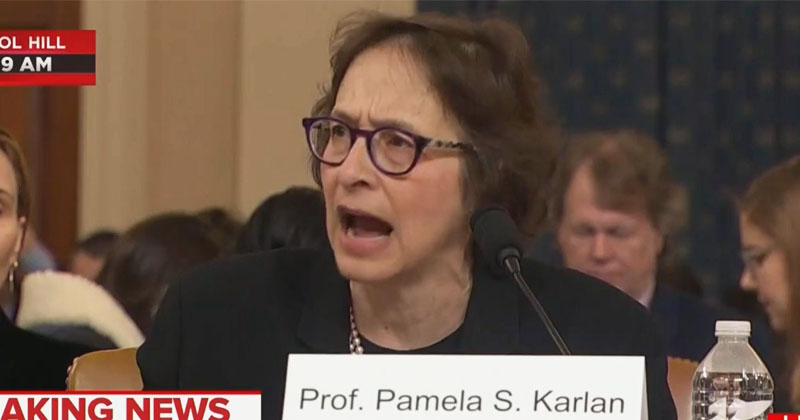 One of the “witnesses” brought forward by House Democrats descended into a bizarre rant about how President Trump ruined her Thanksgiving holiday.

Stanford law professor and lawyer Pamela Karlan testified Wednesday before the House Judiciary Committee that she was so distracted poring over other “witness” transcripts during her Thanksgiving holiday that she was forced to order a pre-cooked turkey in the mail.

“I spent all of Thanksgiving vacation sitting there reading these transcripts,” Karlan said. “I didn’t – I ate, like, a turkey that came to us in the mail that was already cooked because I was spending my time doing this.”

This professor testifying on impeachment says she spent "all of Thanksgiving vacation sitting there reading these transcripts. I ate a turkey that came to us in the mail that was already cooked."

That’s so horrible! TRUMP MUST BE IMPEACHED FOR THIS.

Karlan angrily condemned Trump during her testimony before the House Judiciary Committee, claiming that the president asking Ukraine President Zelensky to investigate corruption was an “abuse of power” that “undermines democracy.”

Stanford Law School's Pamela Karlan: "… drawing a foreign government into our elections is an especially serious abuse of power because it undermines democracy itself. Our Constitution begins with the words 'We the People' for a reason." https://t.co/vPwGQjeJkw pic.twitter.com/E0kgLyM0kF

However, several foreign policy officials brought forward by Democrats as witnesses testified that Trump looking into Ukraine corruption was warranted and necessary.

Alex Jones brings video proof of the danger posed to America by the rotting diseased brains of the left.