Former Representative Dennis Kucinich warned the Vault 7 data dump by WikiLeaks demonstrates the United States is sliding down a slippery slope towards totalitarianism.

“It is becoming increasingly clear that we are sliding down the slippery slope toward totalitarianism, where private lives do not exist,” Kucinich said on Fox News.

Kucinich served as a Democratic representative of Ohio for 16 years.

The former Congressman suggested the “wholesale gathering of the nation’s ‘haystack’ of information by the government” has eroded the concept of a “right to privacy.”

“The constant erosion of privacy at the hands of the government and corporations has annihilated the concept of a ‘right to privacy,’ which is embedded in the rationale of the First, Third, Fourth, Ninth and Fourteenth Amendments to the U.S. Constitution,” he said.

While noting the grave threat posed to the privacy of Americans by the government, Kucinich also blasted the CIA for leaving backdoors open for individual hackers to exploit.

“It is bad enough that the government spies on its own people,” Kucinich said. “It is equally bad that the CIA, through its incompetence, has opened the cyberdoor to anyone with the technological skills and connections to spy on anyone else.”

Kucinich argued the Vault 7 revelations, as well as legislation like the Patriot Act, have created a constitutional crisis, and called on the American people to demand the government end its mass surveillance.

“We have entered a condition of constitutional crisis that requires a full-throated response from the American people,” he said. “I have repeatedly warned about the dangers of the Patriot Act and its successive iterations, the execrable national security letters that turn every FBI agent into a star chamberlain, the dangers of fear-based security policies eroding our republic.”

“We have crossed the threshold of a cowardly new world, and it’s time we tell the government and the corporations who have intruded to stop it.” 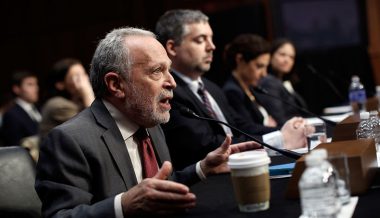