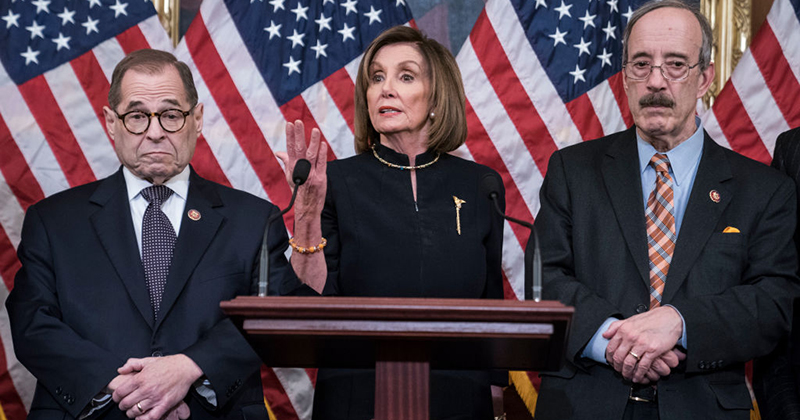 President Trump was “impeached” in the House Wednesday in a fruitless and cynical political move that will simply be thrown out by the Senate. However, Democrats acted like they were liberating the country from the grip of a Nazi dictatorship and freeing millions of slaves.

Nancy Pelosi compared the Democrats’ struggle to remove Trump from office to the Battle of the Bulge against Hitler in World War II, the largest battle US forces have ever been involved in, and one that liberated Europe from Nazi-ism.

The Battle of the Bulge saw 100,000 people die, and the course of history changed forever. Does Pelosi seriously think putting impeaching Trump on a par with that that is a sound comparison?

Pelosi wasn’t alone in her delusions. Rep. David Cicilline argued that if Trump isn’t removed from office the US will be a dictatorship:

Dem Rep. Pramila Jayapal compared the effort to the Revolutionary War AND the civil rights movement, stating that “we are the ones that ultimately have the power to protect or destroy our democracy.”

Dem Rep. Hakeem Jeffries said that removing Trump was akin to ending slavery, arguing that “There are some who cynically argue that the impeachment of this president will further divide an already fractured union. But there is a difference between division and clarification.”

This seems to be the logical conclusion of Trump derangement syndrome.

Ezra Levant joins Alex Jones live in studio to discuss the motive behind perpetuating ‘Trump Derangement Syndrome’ throughout the American populace and the world abroad: the removal of a President by any means necessary.
Also, get all you need to completely stuff Christmas stockings this year with our Christmas Mega Pack sold AT COST during the 12 Days of Christmas Sale!

President Trump himself was in very good spirits as the news broke while he was hosting a rally in Battle Creek, Mich.

“It doesn’t really feel like we’re being impeached,” Trump told the crowd. “The country is doing better than ever before, we did nothing wrong and we have tremendous support in the Republican Party.”

The President went on to proclaim that “Crazy Nancy Pelosi’s House Democrats, through their depraved actions today, have branded themselves with an eternal mark of shame.”

“It’s a disgrace,” Trump added, accusing Democrats of not believing Americans “have the right to select your own president.”