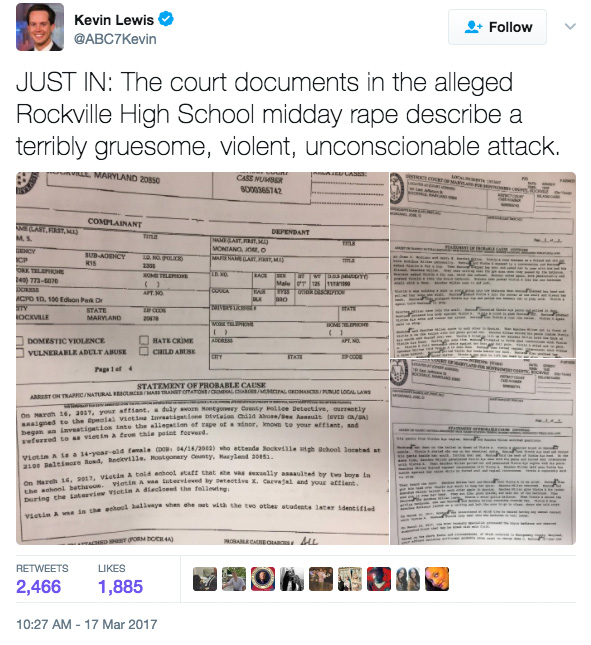 A Democrat city councilman drew comparisons between ICE agents carrying out immigration raids and Nazis during an interview concerning last week’s brutal rape of a 14-year-old girl at a Maryland school.

Cohen clarified his new sanctuary policy demands ICE agents target violent criminals for removal, such as those who committed the rape.

“But we only knew they were violent criminals after they had raped a ninth-grader,” Tucker tells Cohen.

“The fact is that at least one of them, possibly both, but at least one was in violation of the law already and because a lot of your state refuses to enforce federal immigration law he was able to commit that rape.”

“Wouldn’t it have been better to get him out of that school and out of this country before he raped this girl?” Carlson asked.

Cohen pivoted to discussing ICE’s recent deportation of an illegal immigrant Honduran father picked up by agents after dropping off his son at school.

“His only history is violating his status and returning to this country. He escaped violence in Honduras just the same way that my great grandmother escaped violence and persecution in Austria and we welcome him here,” Cohen said, adding, “Immigrants built the fabric of this country and Baltimore is a place that will continue to welcome them.”

Cohen had also previously compared immigration raids to the Holocaust in statements appearing in an article Monday on the City Paper.

“We lost a barber, a business owner and a father. They’re not gang members or drug dealers,” Cohen was quoted as saying. “They are like my grandmother who left everything behind, including a family who perished in the gas chambers.”

Tucker pointed out Cohen was criticizing laws which would have prevented the young girl’s rape, and essentially comparing fellow Americans tasked with enforcing immigration laws to the Nazi soldiers who killed millions of Jews.

“It’s pretty unbelievable that you would compare ICE, federal immigration authorities to the Nazis, which you just in effect did, and you did explicitly yesterday when their enforcing laws that would have prevented this heinous crime,” Carlson stated. “Would you say that to the parents of the girl who was raped? ‘These are Nazis, these Americans who were enforcing immigration laws.’ Why would you say some thing like that?”

Carlson was referring to the violent rape of a 14-year-old Rockville High School student last Friday who was sexually assaulted in a bathroom stall by two other students, including an 18-year-old illegal immigrant, in the middle of the school day.

The assault was described as a “terribly gruesome, violent, unconscionable attack” in a now-deleted tweet from ABC 7 news reporter Kevin Lewis.

"This changed my attitude about a lot of things, as a former bleeding heart liberal" #RockvilleRape pic.twitter.com/vBmKI9XAnQ