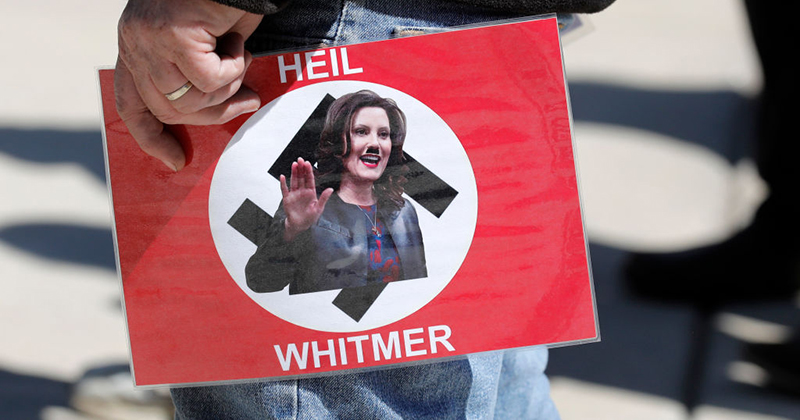 The IPAWSCAP, or Integrated Public Alert Warning System, sent out thousands of messages to cell phones Monday afternoon ‘alerting’ people that it is compulsory that they were face masks in public.

From the Governor’s Office: Fight COVID by wearing a mask. Michiganders are REQUIRED by executive order to wear face coverings in public indoor and crowded outdoor spaces. Business must refuse entry or service to those who do not wear a face covering (with limited exceptions). More info: Michigan.gov/MaskUp.

The use of the system to mandate has wearing has been criticised, and GOP lawmakers are set to introduce legislation to limit what the alert system can be used for, according to reports.

“This is an overt abuse of a service designed to alert people of legitimate emergencies — the governor has gone beyond the scope and intent of the law and is now somewhere over the rainbow and approaching Oz,” said Sen. Peter Lucido in a statement.

Whitmer was also criticised recently for joining Black Lives Matter protesters in the streets after lecturing small businesses for weeks to stay shut down.

To those who have taken to the streets to peacefully protest the structural inequities Black Americans face every day – I’m with you.

Tonight, I urge you to stay home and stay safe. Tomorrow, find a peaceful protest to join and make your voice heard. pic.twitter.com/O8fNNVM8fS

The biggest hypocrite of the day goes to @GovWhitmer, who violated her own social distancing guidelines at a protest march after telling the state that protesting would bring a surge of the #COVIDー19 virus.

It's time to FULLY open the state!!!pic.twitter.com/swNcXdaOJR

This is Gretchen Whitmer.
She threw Michigan residents in jail and stripped them of their livelihoods if they did not “social distance.”
She called a group of peaceful protesters “terrorists.”
In case you were still wondering if the lockdowns were a vicious hoax to hurt Americans pic.twitter.com/PoOnuQFAke