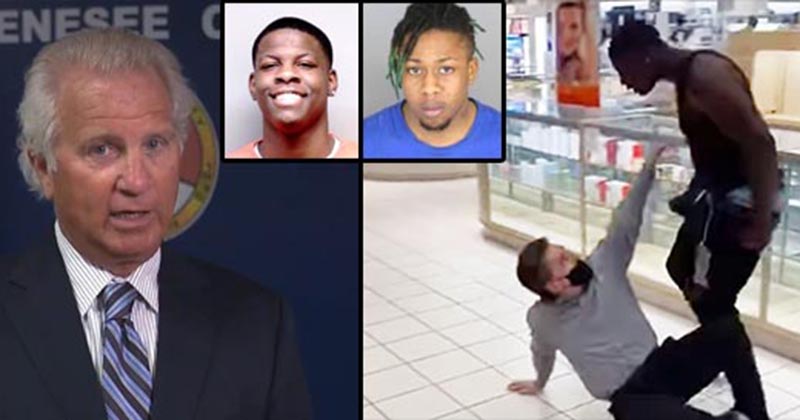 It has been ten days since the brutal attack on a white Macy’s employee by a black suspect occurred at Genesee Valley Center but Genesee County prosecutor David Leyton (D) said Tuesday he still hasn’t decided whether he’ll file any charges in the case.

Damire Palmer, 18, and Damarquay Palmer, 22, shared video of the June 15 attack themselves on social media and it was picked up on Monday by President Trump.

Looks what’s going on here. Where are the protesters? Was this man arrested? https://t.co/2E1UbU5vNN

It’s been 10 days since this Macy’s employee was brutally assaulted. The prosecutor @dsleyton still has not filed charges. He said that he’s deciding whether to charge or not. He’s actually considering not filing charges for what you see here.

Owen describes how the left media keeps doubling down on their claims on racism and pushing for the race war to blow up.

“All the materials from the evening have been reviewed and it is clear that the attack was unprovoked,” Macy’s said in a statement on Tuesday.

“I will make a fair and just decision as to whether charging, or not charging after I have all the information,” Leyton said in an interview with ABC 12 WJRT on Tuesday.

Leyton claimed he wants “more information” as their police reports are not “complete” and suggested Trump should “send more resources” to Genesee County to speed up the case because it’s “not the most wealthy county.”

This is beyond parody.

Keep in mind that the assailant himself doesn’t claim he was acting in self defense. He only claims the employee said a bad word. How would that make any difference at all in a criminal case? Could a word legally justify felony assault?

There is only one man being violent in the video. The assailant doesn’t even claim it was self defense or that anyone else was violent. He claims the victim said a bad word. What do you need to investigate? You have a felony assault on tape. https://t.co/jLEwKnUyyG

Leyton last week decided to back off prosecuting criminals for low-level crimes “in light of the very important social conversations currently taking place across the nation.”

Leyton in 2010 was accused by Debbie McIntosh, the mother of 2006 murder victim Adam McIntosh, of letting her son’s killer and his accomplices off easy.

“Our son Adam was brutally murdered by drug dealer Horatio Brown and two other gang members.

“David Leyton promised he would prosecute those responsible.

“He promised us justice.

“Instead, he cut an outrageous plea deal with Brown and then he refused to press charges against the other two killers.

“Then, his office told us to get over it. How do you get over the death of your son?”

Leyton dismissed her claims by accusing her of “anti-semitism.”