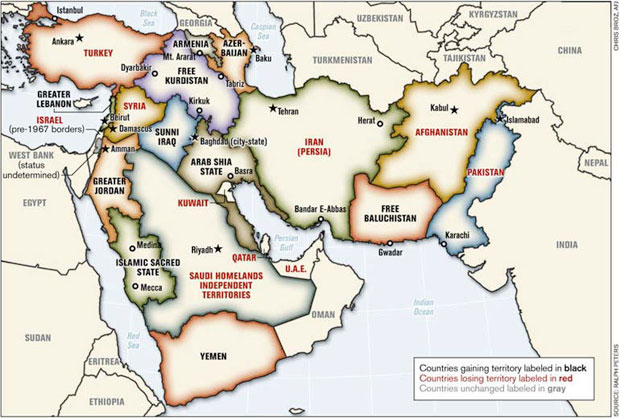 The Brookings Institute — the Democrat think tank funded by the Ford Foundation, the Rockefellers, and Goldman Sachs — has called for balkanizing Syria.

#Brookings Institution presents plan to break up #Syria: "Towards a regionalized strategy for a confederal country" http://t.co/QWSleq9axE

Brookings made the call a few days before the Obama administration declared war on Syria. It is essentially a rehash of the neocon agenda to balkanize states in the region not aligned with the United States, Israel and Saudi Arabia.

Michael E. O’Hanlon, who supported the invasion of Iraq and teamed up with the neocon think tank Project for the New American Century during the occupation, describes how Syrian sovereignty would be eviscerated:

The idea would be to help moderate elements establish reliable safe zones within Syria once they were able. American, as well as Saudi and Turkish and British and Jordanian and other Arab forces would act in support, not only from the air but eventually on the ground via special forces. The approach would benefit from Syria’s open desert terrain which could allow creation of buffer zones that could be monitored for possible signs of enemy attack. Western forces themselves would remain in more secure positions in general—within the safe zones but back from the front lines—at least until the reliability of such defenses, and also local allied forces, made it practical to deploy and live in more forward locations.

Even the pro-war establishment media realizes there is no such thing as “moderate elements” fighting against the government of Bashar al-Assad.

The so-called safe zones would be occupied by fanatical jihadists and ISIS fighters the US claims it is attempting to eradicate (and now admits it cannot defeat). The Sunni jihadists will be militarily supported by US, British, Saudi, Turkish and “other Arab forces” working to take out the Shia dominated government in Damascus.

O’Hanlon then weaves a fantasy. He claims the “autonomous zones” (balkanized areas violently divested from Syria) would be ISIS-free:

Creation of these sanctuaries would produce autonomous zones that would never again have to face the prospect of rule by either Assad or ISIL. They would also represent areas where humanitarian relief could be supplied, schools reopened, and larger opposition fighting forces recruited, trained, and based. U.N. agencies and NGOs would help to the extent possible; regardless, relief could certainly be provided far more effectively than is the case today.

This humanitarian concern is not present in “democratic” Iraq (as Brookings admits) or Libya.

Iraq as the highest populations of internally displaced people in the world. Conditions following the US-backed overthrow of Gaddafi in Libya are so dire hundreds of thousands of people have fled to neighboring states. Earlier this week hundreds of refugees drowned in the Mediterranean attempting to escape. It is estimated 2,000 people have died this year trying to flee the country.

“Notice how O’ Hanlon never considers the moral implications of obliterating a sovereign nation, killing tens of thousands of civilians, and displacing millions of others. Those kinds of things simply don’t matter to the pundits who concoct these imperial strategies. It’s just grist for the mill,” writes Mike Whitney.

“As it happens, these prospective safe zones are a vital part of O’Hanlon’s broader plan to break the state into a million disconnected enclaves ruled by armed mercenaries, al Qaida affiliates, and local warlords.”

The Democrat plan for the “New Middle East” (a term coined by U.S. Secretary of State Condoleezza Rice) varies little from the ostensible Republican neocon version. A graphic version of this plan to reorder the region was introduced by Lieutenant-Colonel Ralph Peters and made public in June, 2006.

“The overhaul, dismantlement, and reassembly of the nation-states of the Middle East have been packaged as a solution to the hostilities in the Middle East, but this is categorically misleading, false, and fictitious,” writes Mahdi Darius Nazemroaya. “The advocates of a ‘New Middle East’ and redrawn boundaries in the region avoid and fail to candidly depict the roots of the problems and conflicts in the contemporary Middle East. What the media does not acknowledge is the fact that almost all major conflicts afflicting the Middle East are the consequence of overlapping Anglo-American-Israeli agendas.”

In Syria the plan is to remove the Shia Alawite sect originally put into power by French mandate after the First World War and “liberate” (as O’Hanlon calls it) the country along ethnic lines determined by the United States, Britain, Israel, Saudi Arabia and Turkey.

“The ultimate objective is to weaken the resistance movement against foreign occupation through a ‘divide and conquer strategy’ which serves Anglo-American and Israeli interests in the broader region,” Nazemroaya explains.