Democrats are having a hissy fit over Rand Paul’s comments about former president Bill Clinton, and Ted Cruz’s insistence that the office of the president is becoming dictatorial. Paul said Democrats are hypocritical for saying Republicans are engaged in a “war on women” while at the same time praising the scurrilous Bill Clinton, who had a sordid affair with a White House intern, Monica Lewinsky.

Texas Sen. Ted Cruz has also boldly been leveling counter-attacks against the Democratic establishment, highlighting how the president’s “pattern of lawlessness, his willingness to disregard the written law and instead enforce his own policies via executive fiat” proves an orchestrated effort to morph the executive branch into a dictatorship.

In addition, Newsmax reported in 1999, citing Star magazine’s Richard Gooding who had the scoop on confidential FBI files, Clinton employed his pervasive pattern of inappropriate hanky-panky with three female Secret Service agents, thus throwing caution to the wind as most sexual predators do.

Broaddrick and other women, according to Newsmax, said Clinton has a thing for holding down his victims and biting their lips. 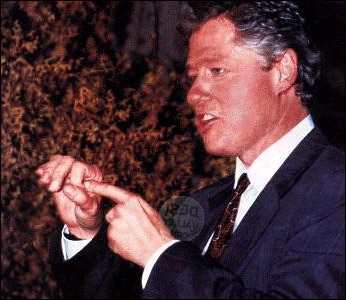 Sordid details on Clinton’s sadistic behavior appears in Michael Isikoff’s book, Uncovering Clinton: A Reporter’s Story. “It was rough sex,” Isikoff writes about Clinton’s encounter with the former Miss America Elizabeth Ward Gracen. “Clinton got so carried away that he bit her lip, Gracen later told friends. But it was consensual.”

“Isikoff missed the lip-biting connection,” writes Jack Cashill for WorldNetDaily. “He also failed to acknowledge that at least one of Gracen’s friends, Judy Stokes, had told the Paula Jones legal team that the sex was not consensual at all.”

“The reason rapists bite is because, even with the full weight of her attacker on top of her, the woman is often able to resist the parting of her legs by locking her ankles. The rapist’s arms are busy keeping her pinned down. The only weapon the rapist has left is his teeth, which he uses to bite while demanding she open her legs,” explained a former rape investigator with the New Orleans Police Department. “Some women are stronger than others and I’ve seen their lips half-torn from their faces before they give up.”

Class and position apparently did not deter Clinton, according to another report:

“Before her death, Princess Diana claimed privately that a ‘very flirtatious’ Bill Clinton made a pass at her during one of several meetings; and that she considered accepting – according to close friends who recently shared Diana’s confidences with noted royal author Judy Wade. Wade conducted ‘scores’ of interviews with confidantes to the late Princess of Wales for her soon-to-be released biography, ‘Diana: The Truth,’ which is excerpted in next week’s National Enquirer. After one Clinton encounter Diana reportedly said, ‘We were a little naughty with each other,’ according to one confidante who talked to the tabloid directly,” Newsmax reported in 2000.

There was, as well, a reported dalliance with actress and singer Barbara Streisand. Rumors are rife, including Clinton coming on to actresses Markie Post and Sharon Stone, celebrity Martha Stewart, and beauty queen Lencola Sullivan. Liz Hurley reportedly fell victim to Clinton’s wiles, but the actress has denied the claim.

Democrats, of course, ignore Bill Clinton’s predatory behavior. He is a revered icon in their pantheon of elder statesmen. After reading the long list of victims enumerated below (from the Alamo Girl website), they may want to find somebody  else as their poster boy in the contrived and politically expedient “war on women” election season meme.

Following are names of ladies rumored to have had sexual relations with Bill Clinton. We of course do not have information to support these rumors and do not intend the reader to think that we believe any of them to be true. Some could be true, some could be false and some could be intentionally spread rumors so absurd as to make the ones listed above and all other rumors look absurd as well. As always, please draw your own conclusions: