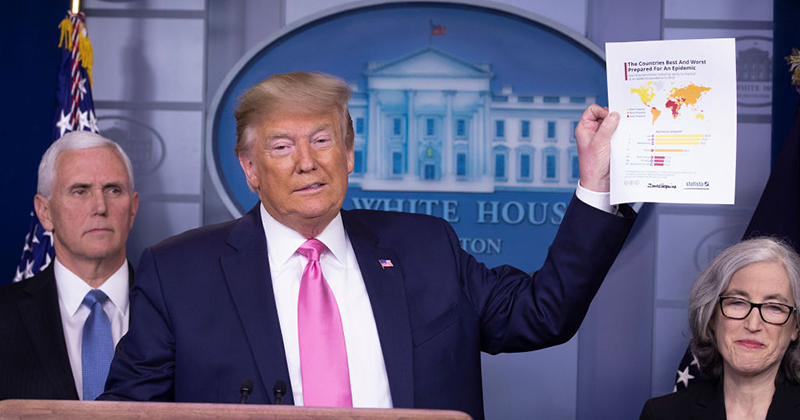 Democrats and the New York Times are blaming President Trump for the spread of the Coronavirus to the US, despite the fact that he presided over enhanced border controls and blocking flights from infected areas weeks ago.

The AP noted Wednesday that both Mike Bloomberg and Joe Biden are flat out wrong in claims that Trump cut resources for the Centers for Disease Control and Prevention (CDC) and National Institutes of Health (NIH).

Democratic presidential contenders are describing the federal infectious-disease bureaucracy as rudderless and ill-prepared for the coronavirus threat because of budget cuts and ham-handed leadership by President Donald Trump. That’s a distorted picture. For starters, Trump hasn’t succeeded in cutting the budget.

He’s proposed cuts but Congress ignored him and increased financing instead. The National Institutes of Health and the Centers for Disease Control and Prevention aren’t suffering from budget cuts that never took effect.

In addition, the budget cuts proposed by Trump had absolutely nothing to do with Coronavirus prevention preparedness, and were related to Ebola virus response, which was no longer needed at such high levels because the threat from the virus in the US has faded.

“Some Democrats have charged that Trump decimated the nation’s public health leadership, but [John Auerbach, president of the nonpartisan Trust for America’s Health] said CDC’s top scientific ranks have remained stable during the past three years.” the AP fact check notes.

Nevertheless, Democrats will willingly distort the facts and lie to the public to score political points.

During Thursday’s Democratic debate, Bloomberg claimed “There’s nobody here to figure out what the hell we should be doing. And he’s defunded — he’s defunded Centers for Disease Control, CDC, so we don’t have the organization we need.”

So, the Coronavirus, which started in China and spread to various countries throughout the world, but very slowly in the U.S. because President Trump closed our border, and ended flights, VERY EARLY, is now being blamed, by the Do Nothing Democrats, to be the fault of “Trump”.

The Do Nothing Democrats were busy wasting time on the Immigration Hoax, & anything else they could do to make the Republican Party look bad, while I was busy calling early BORDER & FLIGHT closings, putting us way ahead in our battle with Coronavirus. Dems called it VERY wrong!

As Trump himself noted, he went against advisors by shutting down travel from heavily infected areas of China weeks ago. By doing this, Trump likely helped slow the outbreak in the US, providing more time for the government to prepare.

Of course, Trump haters are on board with the lying Democrats, with the New York Times even suggesting that the Coronavirus should be renamed “Trumpvirus.”

So who doesn't believe in science? @nytimes https://t.co/Pt2olOx5vU

So China unleashes a highly viral and significantly deadly virus and actively shuts down information about it, the virus hits every populated continent…and you're calling it Trumpvirus? https://t.co/6hFZk88uLm

Can you imagine the liberal outrage if a conservative newspaper wrote an article calling the Ebola Virus the Obama Virus and blaming him for it?