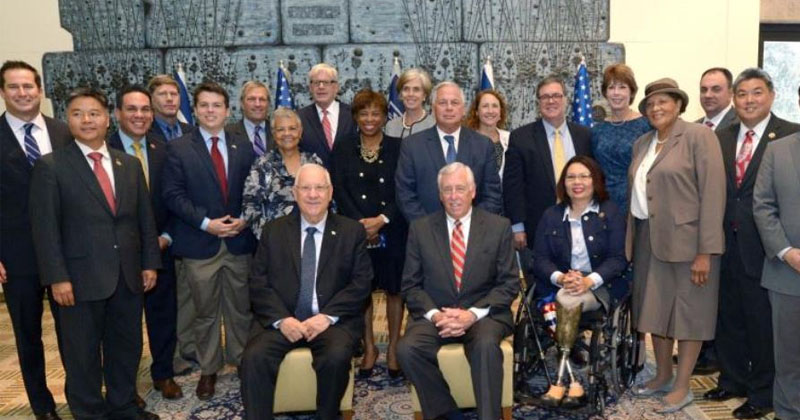 As the Jeffrey Epstein “suicide” scandal was exploding on social media, GOP House Leader Kevin McCarthy announced he and dozens of other members of congress arrived in Israel for an all-expense-paid trip.

THEY SAY HE DIED BY SUICIDE.

Just arrived in Israel with dozens of other members of Congress—Republican and Democrat. We are here to show unity in our support for Israel and her people. 🇺🇸🇮🇱 pic.twitter.com/rIUvAQIkZQ

You can see the whole gang in that last picture grinning from ear to ear.

Today on AIEF missions, 70+ members of Congress (Democrats and Republicans) went to the West Bank and the city of Bethlehem. https://t.co/Wgm1q8BXkT

Steny Hoyer and 41 other Democrats started their all-expense-paid extravaganza earlier this week:

Hoyer and 41 Democrats visit Israel on AIPAC-affiliated junket that violates 'spirit as well as the letter of the law' https://t.co/AEG78jQ6Sa

"If you look at the people who joined this trip, you’ll see many people from swing districts for whom it’s important to be seen as pro-Israeli"https://t.co/MqXIP0sepV

“I think this is the pro-Israel stream in the Democratic Party, which is the mainstream of the party, reasserting itself and saying that while we respect the grassroots in our party, they can’t speak for us, particularly not on Israel.” https://t.co/b494ffY488

The former Prime Minister of Israel and head of Israeli Military Intelligence, Ehud Barak, would "often" crash at Jeffrey Epstein's apartment building in New York's Upper East Side, according to Epstein's neighbors. https://t.co/Evt6cFVtu6

Epstein’s alleged madam, Ghislaine Maxwell, is the daughter of media mogul Robert Maxwell, who has been dubbed “Israel’s Superspy.”

Jeffrey Epstein's madame was Ghislaine Maxwell, daughter of Robert Maxwell – a Mossad Agent. What are the odds Epstein was also working for Mossad? I mean the guy was blackmailing the top politicians/businessmen in the USA via underage sex. https://t.co/alUurM2eVb

Gordon Thomas and Martin Dillon state in their 2002 book, “Robert Maxwell: Israel’s Superspy,” that evidence shows the Mossad ordered Robert Maxwell’s assassination after he piled up mountains of debt and outlived his usefulness.

Yes, that makes sense. Everyone around Epstein was a HUGE Russia supporter – Dershowitz, Wexner, Maxwell, Barry Krischer and Epstein himself. Just look at their philanthropies. It screams RUSSIA! https://t.co/X8v3OD4M0L