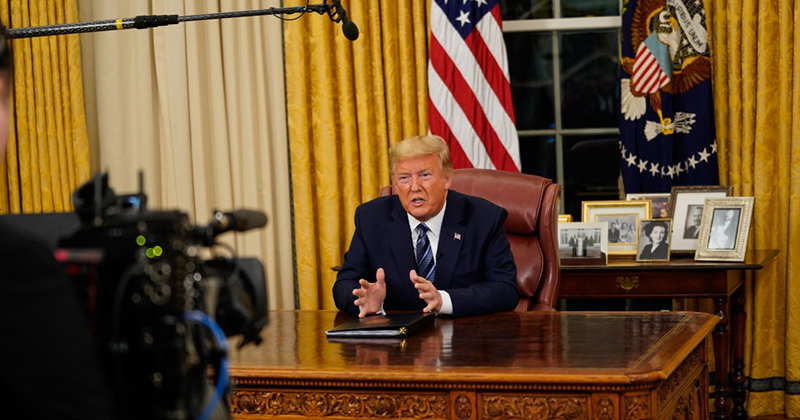 House Democrats have introduced legislation that would undo President Trump’s travel bans from coronavirus stricken areas, despite the fact that the director of the National Institute of Allergy and Infectious Diseases (NIAID) has said that the impact of the crisis would be much worse had the travel bans on China and Iran not been in place.

Democrats want to strip the President of the authority to implement the bans, introducing a bill titled the “No Ban Act,” which would allow travellers from Wuhan and other infected areas to keep arriving in the US unimpeded.

“This bill imposes limitations on the President’s authority to suspend or restrict aliens from entering the United States and terminates certain presidential actions implementing such restrictions,” the bill  summary reads.

The legislation vaguely says that Trump should only be able to “issue a restriction when required to address a compelling government interest.”

The bill further declares that before any travel ban is imposed, the President would be mandated to “consult with Congress.”

Democratic Presidential contender Bernie Sanders also said this week that he would not impose any travel bans during the coronavirus crisis.

The action flies in the face of advice from Dr. Anthony Fauci, director of the NIAID, who told lawmakers during a House Oversight and Reform Committee hearing Wednesday that “I believe we would be in a worse position,” had such travel bans not been imposed by Trump.

“Whenever you look at the history of outbreaks, what you see now in an uncontained way and although we are containing it in some respects, we keep getting people coming into the country that are travel-related, we’ve seen that in many of the states that are now involved.” Fauci said.

“We will see more cases and things will get worse than they are right now. How much worse they get will depend on our ability to do two things: To contain the influx of people who are infected coming from the outside and the ability to contain and mitigate within our own country. Bottom line, it’s going to get worse.” he added.

Fauci’s comments regarding travel restrictions have been echoed by The New England Journal of Medicine, which recently reported: “At least on a temporary basis, such restrictions may have helped slow the spread of the virus.”

Trump extended the travel ban Wednesday night to most of Europe (but not the UK) for at least 30 days.

“The European Union failed to take the same precautions and restrict travel from China and other hot spots,” the president said, adding “As a result, a large number of new clusters in the United States were seeded by travelers from Europe”.

Trump’s words, and the announcement of the travel restriction drew anger from some European officials, who reportedly described it as “unbelievable” and “very strange.”

Taking an emergency such as the #Coronavirus epidemic as another opportunity to wage his personal war against #China and the #EU … that says everything!

Any attempt to contain the #CoronaOutbreak is welcome, but the decision of @realDonaldTrump to exclude the UK from a European travel ban is nothing short of irresponsible. Viruses do not recognise borders. Decisions should be based on facts, not politics.

The European Commission and Council issued a joint statement declaring that “The European Union disapproves of the fact that the US decision to impose a travel ban was taken unilaterally and without consultation.”

“The Coronavirus is a global crisis, not limited to any continent and it requires cooperation rather than unilateral action.” the statement continued.

Trump was unwavering in his belief that his administration can mitigate the spread of the virus:

I am fully prepared to use the full power of the Federal Government to deal with our current challenge of the CoronaVirus!

….Together we are putting into policy a plan to prevent, detect, treat and create a vaccine against CoronaVirus to save lives in America and the world. America will get it done!

Someone needs to tell the Democrats in Congress that CoronaVirus doesn’t care what party you are in. We need to protect ALL Americans!

The Media should view this as a time of unity and strength. We have a common enemy, actually, an enemy of the World, the CoronaVirus. We must beat it as quickly and safely as possible. There is nothing more important to me than the life & safety of the United States!