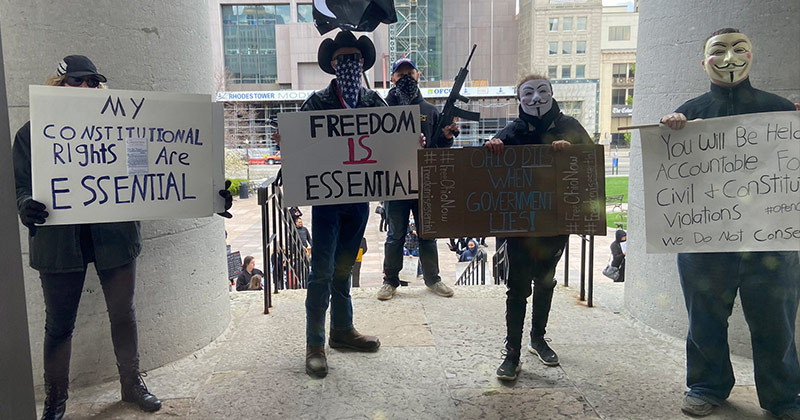 Protesters gathered outside the Ohio Statehouse in Columbus on Thursday to demonstrate against Gov. Mike DeWine and Ohio Department of Health director Dr. Amy Acton.

Around 100 protesters crashed the governor’s coronavirus press briefing to stand up against the state’s “stay-at-home” order, in what appears to be the first example public dissent directed toward COVID-19 decrees.

Marchers chanted, “Open Ohio,” and held signs reading, “Quarantine Worse Than Virus,” “My Constitutional Rights Are Essential,” “Freedom Is Essential,” along with other slogans.

Big protest happening outside the #Ohio Statehouse. Protestors angry with @GovMikeDeWine and Dr. Amy Acton’s actions during the #COVID19 pandemic. Many say DeWine and Acton don’t have the power to shut down businesses. pic.twitter.com/M2Vsscj8qF

They got a lot closer as they showed us their signs – this pic was taken through a locked door to the Statehouse pic.twitter.com/SNl7ZIfCGZ

Governor DeWine did recognize the protesters’ right to be there as the state’s ban on mass gatherings allows First Amendment expression, however, he urged them to “try not to shout on each other.”

Speaking from inside the statehouse, likely for an added effect, Dr. Acton acknowledged the protesters outside.

“I don’t know if you can hear, there are people protesting right outside the statehouse, And people are worried, they’re afraid. They’re worried about their jobs. We are working very hard on how we are going to get through this beyond this,” she said.

Will more Americans defy city, county and state orders and defend the Constitution?

Watch the following news report from WBNS 10 in Columbus, Ohio: