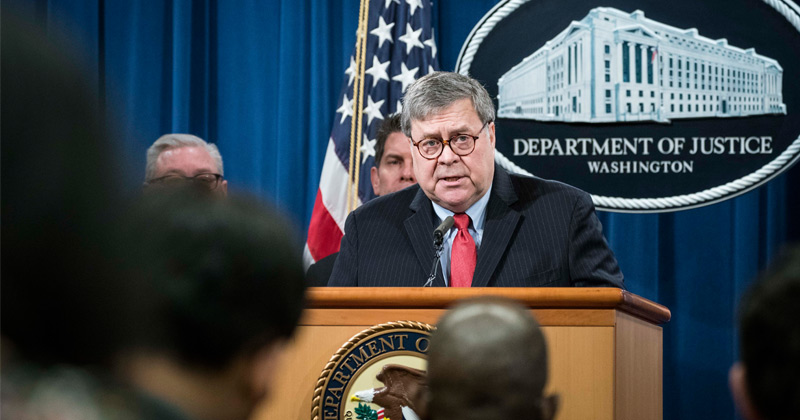 While Attorney General William Barr continues his investigation into Russiagate for which Sen. Lindsey Graham (R-SC) said ‘half the people are going to jail’ if we ‘just hang tight,’ Democrats across the board are calling for his resignation – or impeachment, following his decision to overrule federal prosecutors on their recommended sentence for former Trump adviser Roger Stone.

There’s also been talk of a second Trump impeachment over allegations that he interfered in Stone’s case, according to Fox News.

From members of Congress to members of the media, political operatives to law professors, Barr is under intense scrutiny from the left for alleged “misuse of the criminal justice system” involving not only the Stone case, but for the removal of a U.S. Attorney and accepting Ukraine-related information from Trump’s personal lawyer, Rudy Giuliani. –Fox News

In a Friday tweet, Trump quoted Barr’s highly-publicized comments Thursday that he’s never been asked to intervene in a criminal case – saying “This doesn’t mean that I do not have, as President, the legal right to do so…”

“The President has never asked me to do anything in a criminal case.” A.G. Barr This doesn’t mean that I do not have, as President, the legal right to do so, I do, but I have so far chosen not to!

Barr has agreed to answer questions during a March 31 hearing in front of Rep. Jerry Nadler’s (D-NY) House Intelligence Committee, after Nadler wrote “you have engaged in a pattern of conduct in legal matters relating to the President that raises significant questions for this Committee,” in a letter confirming that Barr would testify.

After Barr took the unprecedented step to soften a recommended 7 to 9 year sentence for lying, witness tampering and other process crimes, four DOJ prosecutors resigned their posts, while Democrats called the move “without precedent.”

“This situation has all the indicia of improper political interference in a criminal prosecution,” said Senate Majority Leader Chuck Schumer (D-NY) in a letter to DOJ Inspector General Michael Horowitz regarding Stone’s sentencing. “I therefore request that you immediately investigate this matter to determine how and why the Stone sentencing recommendations were countermanded, which Justice Department officials made this decision, and which White House officials were involved.”

Sen. Richard Blumenthal, D-Conn., said Barr “ought to be ashamed and embarrassed and resign as a result of this action directly interfering in the independent prosecution of Roger Stone.” He also said the controversy was yet another example of “political interference by the president to alter the independent decisions of the Department of Justice.”

Nadler didn’t answer a question on whether Barr should resign but said: “I think the behavior is extremely egregious.” -Fox News

Nadler openly posited that Barr might be “in league with Mr. Giuliani and his associates.”

MSNBC legal analyst Glenn Kirschner has called for Barr’s impeachment, saying that the AG has lied “to Congress, he lied about the Mueller report, he refuses to investigate obvious crimes by the administration, he is conflicted out of many matters but refuses to recuse.”

Indeed, there is no shortage of triggerings for Democrats who seek to dismantle the Trump administration by any means possible.