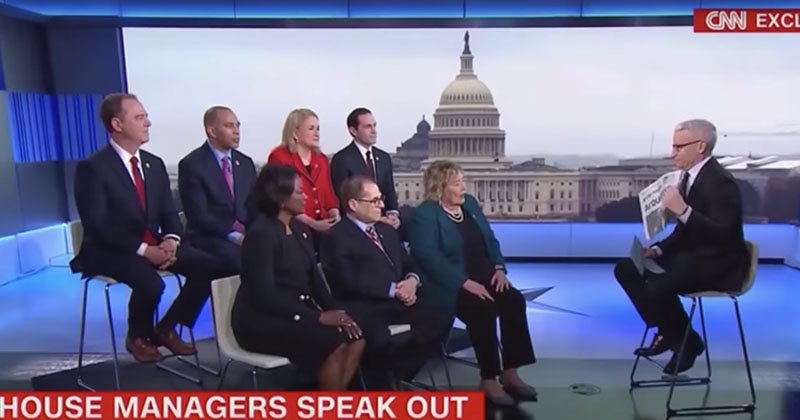 The seven Democrat House managers who led the impeachment against President Trump went on CNN Friday to gripe about the fact the Senate acquitted Trump of both articles of impeachment earlier this week.

During what appeared to be a group therapy session led by anchor Anderson Cooper, House impeachment managers, including Reps. Adam Schiff (Calif) and Jerry Nadler (N.Y.), did their best to discredit the Senate’s acquittal of Trump on Wednesday.

“I think he’s not been exonerated,” California Rep. Zoe Lofgren said. Colorado Rep. Jason Crow then quickly added that “it’s hard to have an acquittal without a fair trial.”

“And this was the first impeachment trial in American history where we didn’t have witnesses and documents,” Crow said. “And I think the American people realize that, because, as we sit here right now, there are thousands of Americans walking into courthouses across the country, and they’re taking their oath, and they’re going to be sitting as jurors in trials.”

“And they’re going to hear from witnesses and documents. And they’re asking themselves why Washington and Donald Trump should be any different. And, of course, the answer is, it shouldn’t. And they understand that.”

Nadler chimed in, saying that that “given the nature of the Republican Party,” they were never going to vote to convict no matter what evidence was presented at the trial.

“Well, and back to the acquittal part of this, I would consider that fake news, because we did not have a fair trial,” Demings said.

The Senate voted Wednesday 52-48 on the first article of impeachment and 53-47 on the second, acquitting Trump of both charges, meaning he was, in fact, exonerated.

Alex Jones breaks down how Pelosi’s bizarre behavior during the State of the Union address is a sign that the Democratic Party is officially dead.