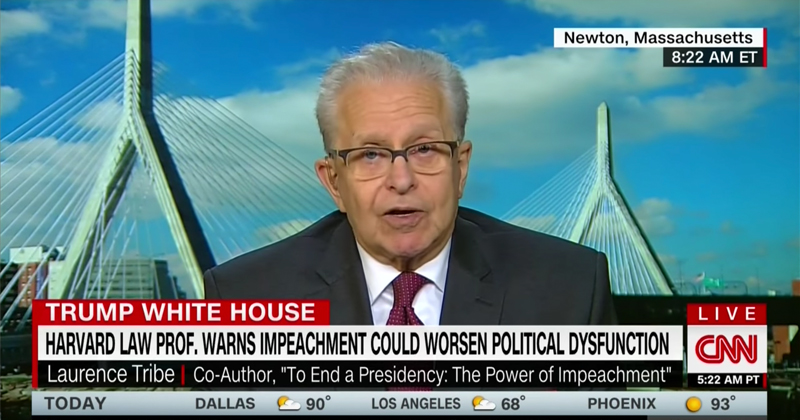 Tribe invokes the framer’s intent that the impeachment process is about the abuse of authority given to officials; a simple “garden variety crime” is not enough to bring down the head of state.

“If it turns out – and I wouldn’t be surprised to find – that Donald Trump is guilty of tax evasion, that may be a crime, but it’s not an impeachable offense,” says Tribe. “On the other hand, if Donald Trump uses the powers of the United States government to cover his own criminality or to cover up the way he cooperated with Moscow in order to win the presidency… it’s certainly an impeachable offense.”

Tribe went one step further with his fantasy-driven narrative.

“If he (Trump) decides, ‘I’m simply not going to protect the United States from foreign attack, I’m busy making money, I’d rather be a kleptocrat than carry out my oath’… that’s certainly the basis for removing a president.”

During an interview with CNN, host Chris Cuomo failed to call Tribe out on his “if” qualifiers as Tribe continued on with what seems to be the Democrats’ last hope:

“If the evidence that Rober Mueller is collecting, forms a kind of compelling case that an overwhelming bi-partisan majority of the American people find convincing that this guy (Trump) is just too dangerous to keep in power, then we do have the emergency power of impeachment available.”

With zero irony, Tribe provided his conclusion with a not-so-diplomatic remark.

“You can’t be ‘the boy who cried wolf’ and expect to have a viable impeachment power, you can’t use it over and over again against the same president. If you’re going to shot him you have to shoot to kill.”

A more calculated approach that still reeks of desperation

Green made it clear that if Democrats retake the House the first order of business is to exercise their opportunity to bring up impeachment.

“Every member of the House is accorded the opportunity to bring up impeachment. This is not something that the Constitution has bestowed upon leadership. It is something that every member has the right and privilege of doing,” said Green during a C-SPAN interview.

Green’s “leadership” reference was referring to Speaker Nancy Pelosi, whom he believes Democrats should not rely on as the only person to call for impeachment.

Today’s baseless calls for Trump’s removal from politicians and academics alike is really a continuation of yesterday’s deep state panic over the imminent collapse of the “Russian collusion” narrative as well as revelations that Obama’s administration illegally spied on Trump during his campaign.