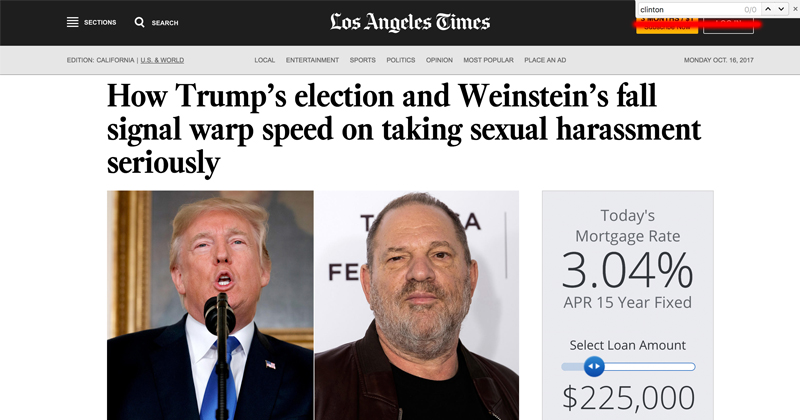 The Democrats were quick to burn one of their own, accused sexual predator Harvey Weinstein, so they can falsely claim President Trump is guilty of sexual impropriety while pretending it isn’t politically motivated.

As Infowars pointed out last week, the mainstream media was desperately trying to link the Weinstein scandal to President Trump while ignoring Bill Clinton, a former president who settled sexual assault lawsuits and was also close friends with Weinstein.

The Weinstein scandal has been brewing for decades, but it’s only coming out now, which suggests Weinstein’s protectors in the media left him out to dry as a sacrificial lamb meant to place the media in a better position to attack Trump by making it look like a general reckoning and not political targeting.

That’s exactly what it is: an attempt to give the media the facelift from covering up for the Clintons and other Democrats allegedly abusing women – including Weinstein – so they can accuse Trump of the same.

Remember, the globalists tried to smear Trump with sexual assault accusations in the last weeks of the presidential election, but the public saw right through it as the media said nothing about Clinton’s known predatory behavior, or of other Democrats for that matter.

At 3AM on Monday morning, the LA Times led the news cycle with a story trying to tie Weinstein with Trump, but the article never mentions the Clintons (as of the time of this writing.)

“As Seth Meyers recently pointed out, both are powerful men accused by multiple women of sexual harassment,” the LA Times’ Lorraine Ali wrote. “Both were caught on tape saying things to and about women that should have ensured they’d never make it a step further in their respective fields.”

“Both found success despite years of rumored bad behavior, until one ended up running Hollywood and the other the United States of America.”

Not surprisingly, there’s no mention of Clinton in the article:

Weinstein is a surrogate Democrat the media can demonize so they can conveniently ignore Bill Clinton’s similar abuse while accusing Trump of sexual assault.

But the case against Trump is a weak one.

Of all the dirt the Deep State and intelligence agencies could dump on Trump during the election, the worst was Trump’s “locker room talk” tape which really paled in comparison to the leaked tape of Weinstein admitting to groping women, not to mention the other accusations lobbied against him.

In comparison, the “sexual assault” lawsuits against Trump only popped up weeks before the election, despite Trump being in the public spotlight for decades, which indicates the lawsuits were politically motivated.

One of the accusers claimed the president “lifted up the armrest” separating them during a first-class flight in 1979, but vintage photos reveal that first-class seats lacked liftable armrests.

She also claimed the domestic flight was on a 707, but the airline only used 727s on those routes, and there’s significant differences between the two planes.

Naturally, the public saw right through the accusations, so the Deep State and its media puppets are now trying to remove the “Clinton factor” from the allegations so they can try once again to take Trump down.