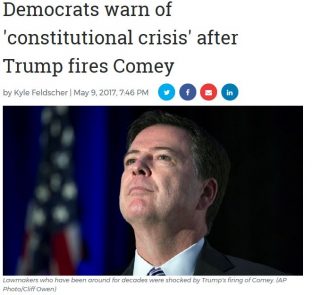 Congressional Democrats are warning President Donald Trump’s decision to fire FBI Director James Comey could lead to a “constitutional crisis” as the deep state prepares to use the firing to put Trump on the “first mile of the Richard Nixon road to impeachment.”

Massachusetts Senator Ed Markey was the first Democratic member of Congress to suggest the country is in peril following Trump’s decision to fire Comey, arguing the decision set a terrible precedent given the FBI’s ongoing investigations into alleged collusion between the Russian government and the Trump campaign. 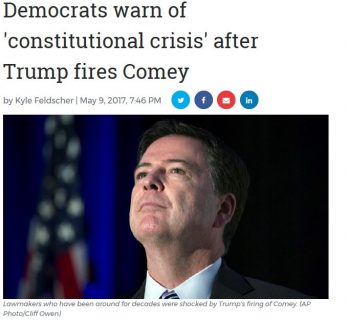 “This episode is disturbingly reminiscent of the Saturday Night Massacre during the Watergate scandal and the national turmoil that it caused,” Markey said. “We are careening ever closer to a constitutional crisis, and this development only underscores why we must appoint a special prosecutor to fully investigate any dealings the Trump campaign or administration had with Russia.”

Michigan Representative John Conyers echoed Markey’s comparison of the firing of Comey to the Watergate scandal, suggesting the move “places our nation on the verge of a constitutional crisis.”

“There is little doubt that the president’s actions harken our nation back to Watergate and the ‘Saturday Night Massacre,'” Conyers said. “This decision makes it clear that we must have an independent, non-partisan commission to investigate both Russian interference in the U.S. election and allegations of collusion between the government of Vladimir Putin and the Trump campaign.”

“Today’s action by President Trump completely obliterates any semblance of an independent investigation into Russian efforts to influence our election and places our nation on the verge of a constitutional crisis,” Conyers added.

Hawaii Senator Brian Schatz tweeted “we are in a full-fledged constitutional crisis.”

We are in a full-fledged constitutional crisis.

“We are witnessing a constitutional crisis unfold before our very eyes,” said Minnesota Representative Keith Ellison. “On March 20, FBI Director James Comey confirmed under oath that the FBI was investigating the Trump campaign for its involvement with Russian officials to influence our election. Today, President Trump fired him.”

The deep state, Democratic Party operatives, and mainstream media will promote the “constitutional crisis” narrative to justify removing President Trump from office via impeachment or for alleged mental incompetence under the 25th Amendment.

“Historians may one day remember May 9, 2017 as a fateful day in American history. In firing FBI director James Comey, the 45th President of the United States may well have set in motion a series of events that could lead to more controversy and potentially even his impeachment less than a year after being sworn into office,” claimed CNN legal analyst Paul Callan.

“The sweetest sound that many Republicans could hope to hear would be Vice President Mike Pence taking the presidential oath.”

Far-left filmmaker Michael Moore took to Twitter to call for the presidential election to be held again in the wake of Comey’s firing.

COMEY FIRED! Dirty, corrupt things afoot. The truth will all come out. The unraveling continues… Hold the election over. Dirty. Corrupt.

“If the president continues to act in this way, we shall rapidly descend into a terrifying state of social dissolution. The rule of law will disintegrate. That will endanger everyone who cares about this country,” wrote Robert Post, a professor at Yale Law School, for Politico.

“If ever there was a time for politicians to put the interests of the nation above those of partisan self-interest, it is now.”

Friends and advisers to President Trump, lawmakers and attorneys who have conducted impeachments, physicians and historians, and current members of the Senate, House, and the intelligence services are already holding “secret conversations” about removing President Donald Trump from office, according to a report from The New Yorker magazine.