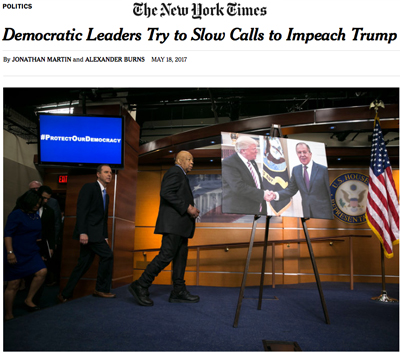 Top Democrats are walking back calls by several members of their party to impeach Trump due to lack of evidence, this amid news that DNC staffer Seth Rich did in fact have contact with WikiLeaks before he was murdered.

“No one ought to, in my view, rush to embrace the most extraordinary remedy that involves the removal of the president from office,” said ranking House Intelligence Committee member Rep. Adam Schiff (D-Calif.) on Wednesday, adding that impeachment calls by fellow Democrats shouldn’t “be perceived as an effort to nullify the election by other means.”

And when asked by CNN host Chris Cuomo on Monday if Democrats should move forward with impeachment proceedings against Trump, House Minority Leader Nancy Pelosi (D-Calif.) responded, “I don’t subscribe to that.”

“What are the facts you would make a case on? What are the rules he may have violated?” she added. “If you don’t have that case, you’re just participating in more hearsay.”

“We’re fiddling while Rome is burning. This president needs to be impeached! I believe that,” Waters told MSNBC’s Chris Hayes last week. “I believe there was collusion. We need to get on with the business of doing real investigations.”

Waters received widespread backlash for her outspoken and baseless rants about impeaching Trump, with signs calling for impeaching Waters beginning to pop up all around L.A.

Though several Democrats and liberal news outlets have been calling for Trump’s impeachment since before he was even sworn in as president, former FBI Director James Comey’s sudden firing by Trump has Democrats ramping up the rhetoric, with them even suggesting an “impeachment clock.”

Additionally, many leftist news outlets including The New Yorker, Salon, Vanity Fair and The Washington Post have released articles calling for Trump’s impeachment in the last week alone.

The timing of Comey’s memo being released, along with the Washington Post’s dubious story about Trump’s alleged collusion with Russia, comes just after news that DNC staffer Seth Rich not only released thousands of internal DNC emails to WikiLeaks before he was murdered, but that the DC police were also ordered to cover it up.

The coincidental timing of the Post’s release, which occurred barely an hour after the new Seth Rich revelations broke, has led many Trump supporters to accuse the leftist news outlet of publishing it in an attempt to distract the media from focusing on the developing Seth Rich revelations.