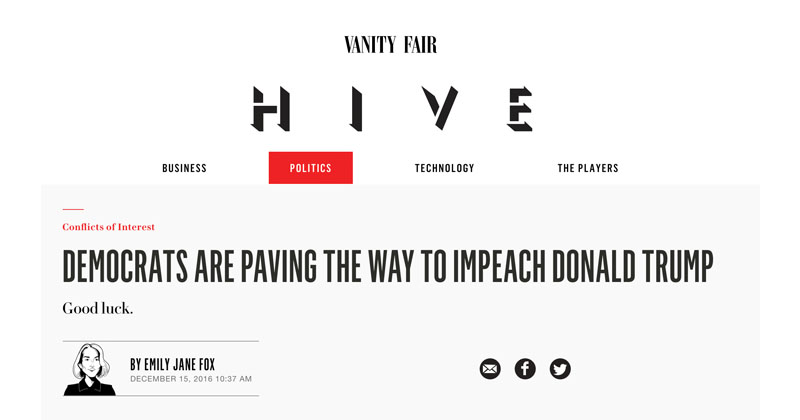 Update: The House of Representatives has just rejected the Democrats’ resolution to impeach President Trump in a staggering 364-58 vote. The original article detailing the upcoming vote appears below.

Anti-Trumper Rep. Al Green (D-TX) says he’ll force the House of Representatives to vote on impeaching President Trump on Wednesday, in a move party leadership has suggested he should abandon.

“Friends, whether we like it or not, we now have a bigot in the White House who incites hatred and hostility,” Green said in a statement to Congress.

“Although he may not be the first bigot in the White House, he is the first who routinely uses Twitter and other public statements to feed an alt-right hate machine, antithetical to the constitutionally protected interests of many minorities, women, Muslims, and the LGBTQ community.”

“I love my country. For this reason, I will bring articles of impeachment to a vote in the House of Representatives on Wednesday, December 6, 2017,” he said.

Tonight, I released the Articles of Impeachment. Tomorrow, the House will vote on the impeachment of Donald J. Trump. (Stay Tuned) #RepealAndReplaceTrump https://t.co/8PUe4zboCX

Green’s resolution accuses Trump of “causing harm to American society,” citing his travel ban of six Muslim-majority countries (designated by the Obama administration as terror-prone nations), his blaming both sides for the violence in Charlottesville, his retweeting of nationalist party Britain First, and his barring of transgender individuals from the military.

Contrary to Green’s assertion that these are “high misdemeanors” that caused “manifest injury to the people of the United States,” none of these instances are crimes or misdemeanors at any level.

For that reason, House Minority Leader Nancy Pelosi pushed back against calls for impeaching Trump last month, saying “you can’t go down any path without the facts, and the law.”

“The fact is that we’ve got to really be saying what this election means to people in their lives. Somebody has some facts that come forth about President Trump, let the chips fall where they may. But it’s not some place I think we should go,” she said.

Ranking House Intelligence Committee member Adam Schiff (D-Calif.) echoed a similar opinion, saying that moving forward on Trump’s impeachment before “all the facts are in” with Mueller’s Russia probe was unwise.

“My feeling is that we shouldn’t give any ammunition to the idea that we are racing to embrace this before all the facts are in,” Schiff said. “Let’s finish our investigations. Let’s see where they lead.”

“I would say that if you’re a congressman or senator and actually have to vote, you want to wait,” Schumer said.

“Let me put it the right way. There may be a time. It is premature. And to call for [impeachment] now you might blow your shot when it has a better chance of happening. It is serious, serious, serious. And so…[pause]…you wait.”

However, the Democrats and liberal media already called for Trump’s impeachment before he had even been sworn in, suggesting they’re motivated by political revenge rather than upholding the law.

The vote has virtually no chance of passing, as the both chambers of Congress have a Republican majority, and a 2/3 majority vote is required to pass in the Senate.